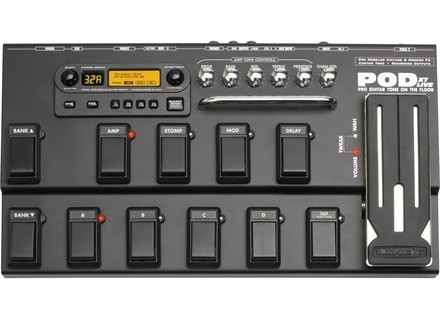 View other reviews for this product:
Everything has been said otherwise see line 6 Site

Super easy to use: can be understood in 10 minutes
According to its own sosna it takes time but normal peauffiner are found amp models acceptable and buttons to turn it more intuitive than the menus in menus

Just a little rant, but not serious to say that after only 2 weeks of use (not heavy) pedal wah / volume started to squeak loudly ... So I have some balls for proceeds paid that price. In addition to access (said pedal) is far from being easy ... result return warranty (fortunately I have not bought used)

Otherwise this product is wonderful and I seem to be the only person it happened .. Stroke of bad luck ...
Too bad it will be in great shape, but before long the repair time can be long ... (10 days in advance)

That it did not seem to be fake but that's it slammed me in the foot like that .. masi happen when it is so it is the rage (especially since I had DL the pack: too deadly by the way)
See the source
Did you find this review helpful?yesno
Cookies help us improve performance, enhance user experience and deliver our services. By using our services, you agree to our use of cookies. Find out more.