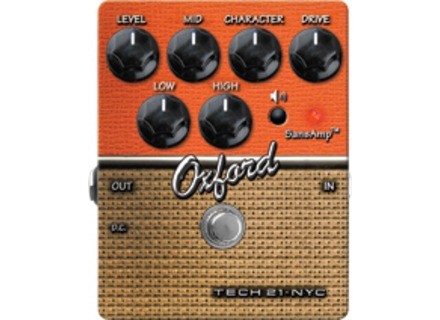 View other reviews for this product:
The character series from Tech 21 has really gone after some of the most highlighted amplifier manufacturers in the world. We have seen a Fender, Mesa Boogie, Vox, Marshall, and several updated version of the Liverpool and the Mesa Boogie. These amp manufacturers are probably the leaders as far as the most used and most recognizable amplifiers in the world.

This particular pedal goes after the voicing s and tones of the famous Orange Amplifiers. These amps have a familiar British character to them but unique on their own. They have a tone that is closer to the Marshall amps and yet has been able to separate itself quiet well with their out of the box high gain amps. Most Marshall amps need to be modified to have the tones you heard in many records or the 70's 80's 90's and today. The Orange amps had that crunch straight from the factory much like the Hiwatts had. Still the tone of the Orange amps in distinct and unique on its own.

This has to be one of my favorites of the character series from Tech 21. My favorite has to be the Mesa Boogie simulator which is called the US Steel or the California. The tone from this pedal is very rich and sounds extremely close to those Orange amps from the 70's. Well at least as close as you can get from a distortion pedal.

I like this pedal with a Gibson Les Paul or another guitar with a humbucker pickup installed. I find that it reacts t the nature of the pedal better with the thicker double coiled pickups.

These pedals are great for going straight into a recording session as they suffer a bit in front of a tube amp. At new these pedals come in at around $169, which is a decent price for this pedal.

I would recommend this pedal to those who want that creamy orange distortion tone and don't want to shell out $2000 for an Orange amp. This pedal will not sound like an Orange amp or have that feel of the tubes but the voicing is pretty close to the style and tone.
Did you find this review helpful?yesno
Cookies help us improve performance, enhance user experience and deliver our services. By using our services, you agree to our use of cookies. Find out more.