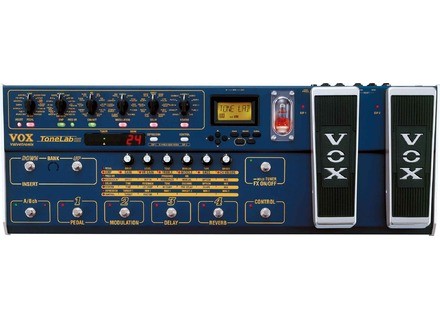 View other reviews for this product:
I think the good that everything has said t, c of the solid very heavy (6kg anyway) and little touches, it comes with its cover.

The c tres simple, intuitive nay. We just rgler the various parameters or with the pots or via the menu on the display numrique (very convenient for purposes rglages). we just assign the expression pedals almost nimporte paramtre and what the effects are all in the paramtrable dtail.

it has a system of A / B box that allows you to change the amp simulator / HP on the same preset, so we keep the pedals and effects enabled but it changes the amp. 4 swicth to select the bank, which are also associated in a particular mode is activated / desactivaton sections of each effect (in order: pedal, modulation, delay, reverb), a control button to tap that ser tempo and also has other functions SPECIFICATIONS some effects. an FX on / off which as its name suggests can blow all the effects except the pedals and if it is supported a second tuner gives access to a good bill.

nice detail, it has a small effect loop that allows a insrer PDAL eg start of string (before the pedal simulation) used to practice or not an external pedals without having to enable or disables every 5 minutes I've got a branch distortion pedals of this fawn little or not I include in my preset and without ever touching it.

I ssay the Pod XT Pro for 1 hour, though I did not reach tripotter the rglages was anything special. I plustot jou in a register extreme (death metal in general) but also clean and bluesy crunch, I never managed to have its very realistic (I always test these devices to the headset, so less easy c) has arrived and the ToneLab, then it's a vamp, just the preset, which are not great for the most part already monstrously sounded better now that all the tampering that I could do on the Pod, and once part of the r tings, very simple in contrast to the pod, it really has the sound.

I would like to talk about the fameu valve reactor, so the lil loupiotte clear by an orange LED. it is associated with a command named VR gain is therefore acting on the gain of the famous lamp simulating the power amp. Well this little thing is bonement miraculous, it brings warmth and dynamic simulation it reproduces even on some simulation of the saturation power tubes with a certain realism very enjoyable to the ear

So we find with this system sounds very realistic end (even if I do not know if it really looks like the originals) as on vintage amp crunch or clean (through the simulation of AC30 is a turie) as large distos hi gain channel.

In terms of saturation, I read everywhere that they are not adapted to the metal. I believe those who say do not have much ca ssay the beast. personally I find my account WIDELY.
I m'explqiue, the most part of simulation hi gain are in fact not so hi gain that it alone, but it is enough to trigger one of many available on the overdrive gear and c hiroshima! Although little is rgl therefore have very good sound very saturated style suitable for all extremes.
I wish also prcis this machine does everything have potential as a good sound system or a keyboard amp, a guitar amp sound is very ALTR and is not optimal. less may be a plug it into a power amp and guitar to cut simulation HPs ....

The effects section is not bad at all, you just choose the same order of chaining effect section 3 after the preamp section (modulation, delay, reverb, therefore, in any order). in general they sound very well, even vintage for sure. some simulation pedals are very average, however, the fuzz sounds pretty bad example, or the pitch shifter if used in very extreme rglage and especially the fact that it is placed after the saturation. Similarly, the Octaver tends adcrocher the low E (in E and F are gnrale adcorcher trend but above ca arranged). The one in the other ca is very good and very usable, not gadgets at all!

basically it's the best simulator t given they like me to try, not k'on can not make very good thing, but with the Pod c TElement binz argler as a cd definitively not for me

I have the gear for about 1 month franchemnt and I'm not, I do some recording and c nikel. I buy it without hsiter!
Go to the SSAI and buy it if you like
See the source
Did you find this review helpful?yesno