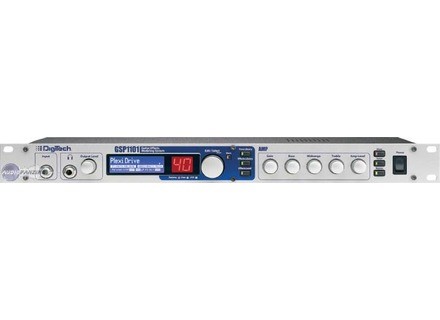 View other reviews for this product:
We are in the presence of a digital multi-effects/preamp, in the line of the Line6 Pod and company. in other words, it emulates:
- Amps (based on models from Mesa, Marshall, ...)
- Cabs (same as for the previous point)
- Modulation effects, reverb, delay...
In short, anything, it's a small Swiss army knife.
Everything can be edited with the buttons or a PC with the Xedit software.
It has rack-mountable format, 1U, and it has pretty varied connection options: XLR output to go directly to the PA, preamp loop to insert it into your favorite tube amp, midi, and usb.
You could say that Digitech has done an all-in-one unit, thought for live and studio.

In my humble opinion, the preamp ought to be immediately upgraded to version C63 (www.mustbebeta.com) as soon as you take it out of the box. This firmware, developed unofficially, adds super advanced routing possibilities, and MORE IMPORTANTLY it allows you to import convolution cab emulations (IR impulse, 10 banks available).

It's not very intuitive, you need to read the manual, especially if you want to use it with a tube amp, with the 4-cable method.
Fortunately, the manual is clear and editing on a PC with Xedit is very practical!

Effects and emulations aren't too bad, without reaching the level of Axe Fx and company, although the price is not the same!
The fact that it uses IRs for the cabs adds an incredible realism and definition (FYI, live, my amp isn't miked, I only use an IR cab emulation and go directly into the PA).
I play mainly metal, with an 8-string Schecter and a Brunetti XL2 R-evo tube amp, using the 4-cable method.
I control this multi-effects with the dedicated Digitech Control2 pedalboard.
FYI, my amp head has three channels and a MIDI port, which allows me to control my presets and amp channels at the same time! Super handy

.
To sum it up, I use the preamp of my Brunetti and the cab emulation of the GSP. When you import IRs make sure they include the cab AND the power amp section, because you only use the preamp, otherwise you'll mess up the tone of the power section if you use a cab IR directly.
The result is amazing for the price, bye-bye to mics in front of the cab live! The sound is detailed, clear!
What's more, I was able to edit an identical sound bank with the GSP alone, in case my tube amp leaves me stranded in the middle of a gig, that way I have a backup without having a different sound!
I give it 6/10 because, compared to a Kemper or Axe Fx, it's still far behind, although they obviously don't cost the same!

I've been using it for 3 years, but I thought about it carefully, due to budget, functionality and format (1U).
To be sure, I tested it during a Musikmesse when it came out and I don't regret it. It's robust, it sounds good, and has no latency when changing effects. Add to that the import of IRs for cabs and it's simply awesome for live gigs.

With hindsight, I think I'd now go for a Kemper or Axe Fx, because if you sum the tube amp, Gsp, pedalboard, rack etc...it's almost the same and, especially, much less heavy

.
And I think Digitech got that, because they haven't updated it in 3/4 years...The direct battle against Line6 is tough, not considering Fractal and Kemper in the high end.
Did you find this review helpful?yesno
Cookies help us improve performance, enhance user experience and deliver our services. By using our services, you agree to our use of cookies. Find out more.