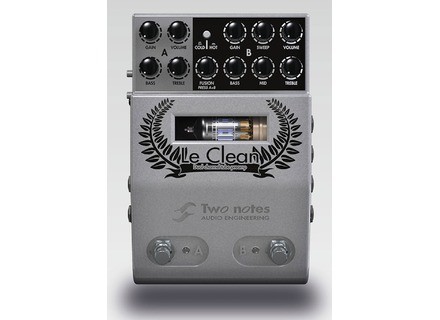 French brand Two Notes Engineering surprised us with a new series of four tube preamp pedals for guitar and bass they introduce at Musikmesse.

The new Two Notes Le Clean, Le Crunch, Le Lead and Le Bass are tube preamps that are based on a 200V True High Voltage technology. They feature two independent channels, each with their own voice and EQ, but thanks to the two-mode Fusion technology, you can either output the channels in parallel (Cold Fusion) or cascade them (Hot Fusion) so that channel A boosts channel B while two get both channel EQs to shape de final sound.

The pedal also include an unbalanced 1/4” output, a balanced DI output with Ground Lift, a headphone output, a post-EQ effect loop, as well as MIDI in and out to either use the pedal as a controller (with the Two Notes CAB for instance) or allow for the pedal to be controlled by another device.

The Le Clean preamp offers a Southern California-type of sound, with an ultra clean channel A and a channel B that offers a classic overdrive.

Le Crunch is more 60s classic British rock oriented ; channel A is clean with a Plexi-like sound, channel B has more punch for rock.

Le Lead ranges from punchy rock to metal, with a channel A that offer clean to slight crunch tone for blues alike, while channel B takes to you modern metal territories

Last, Le Bass is a modern sounding bass preamp, with channel A offering a clear and nice response, while channel B is punchier ; and with the Fusion modes, you can even get synth-like tones.

The new Two Notes lePreamp pedals will be available in September, 2015, pricing is still TBA.