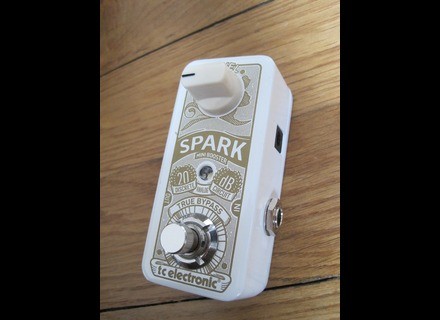 In spite of the unbearable Harlem Shake, the awful slim jeans or the my-favorite-black-metal-artist-is-David-Guetta studded ankle boots, trends can sometimes be good.

Take, for example, music equipment and guitar gear in particular. Right now, the trend is to reduce formats. Guitar players are being bombarded with nano, mini, micro, tiny, etc. amp heads and effect pedals. Riding this wave, several young brands have stuck out their nose: Malekko with its Omicron, Red Witch with its 7 sisters, as well as Mooer and Lovepedal, to name just the most specialized ones. Given its prowess and expertise in guitar effects TC Electronic did not wait for them to start moving in that direction. After the PolyTune Mini (the shrunken version of their celebrated tuner) and the Ditto Looper, the Danish brand has this time taken to another of their flagship products, the Spark Booster, with its "Mini Me" version. Since dwarf pedal throwing is probably prohibited by law, we have to be careful taking it out from its bassinet for a quick examination.).

For starters, this little stompbox seems very "mini" indeed. The brand used the same colors as on the bigger sibling (white and gold), but with a graphic design resembling traditional tattoos. It's just a matter of aesthetics, but it looks very nice and it might make you think twice before stepping on it. 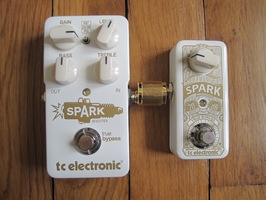 Inside the mini box there is no manual but it's easy to understand why: it only inherited the main function from the Spark, the clean boost. A new circuit without any EQ or gain controls, nor modes, nothing to shape the sound a bit or stand out of the mix without changing the volume too much. Just a level knob, a footswitch and that's it. Less is... less.

While this mini booster is not as complex as the original, its format (51mm x 45 mm x 93 mm) will save you a lot of space in your pedalboard. In fact, many of us use only the most basic functions of our effects. Sometimes the pedals are so big and sophisticated that three of four of them are enough to fill our pedalboard. This new smaller type of design allows us to add more or, on the contrary, reduce considerably the size and weight of our arsenal. In my opinion, it is very desirable that this trend becomes a standard. When I see Seb, singer/guitarist of Abrahma ─ a band where I play ─ carry around two gigantic Pedaltrains full of pedals I think to myself that if he were to use TC minis, he could have the same in just one Pedaltrain... Nano. And it seems the Danes also thought of him, because they had the excellent idea of including the anti-slip pads as accessories inside the box, instead of attaching them directly to the pedal. Who has not ripped off, and then lost, the pads in order to put some Velcro on to secure the pedals to the board? 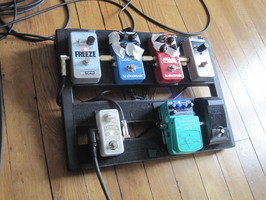 To be honest, living in the magical world of Lilliput has its downsides. The battery is gone, so the guitarist is compelled to use an external 9V power supply. This will not disturb the habits of TC Electronic fans, considering that the Toneprint already had a very limited autonomy. Anyway, it is strongly recommended to use a power supply.

Second micro inconvenience, in order to reduce the width, the jacks are not aligned. Nothing serious, but it is good to know that we won't be able to connect several pedals next to each other using a male-to-male jack adapter like we usually do in our pedalboards. We will need a mini patch cable or a male-to-male adapter like the one in the picture.

Third tiny criticism, the jacks are not very deep ─ again, to spare some space. When I took the pedal out of its box, one of the nuts used to secure the jacks was almost completely loose. We had to give it a couple of turns to fix it. Be careful no to lose them and to tighten them from time to time.

"Just a little spark in the dark" (Alice Cooper)

"Put your guitar down, Sir! I repeat, put your guitar down NOW!" shouts the officer blinding us with his Maglite right on the face. That's the impression you get when the LEDs on some Chinese pedals light up when powered on. In this case, the light is rather white, just like the light at the end of the tunnel when people die (or at least that's what they say, because I've never been dead before... Or have I... Maybe that one time, when I had to play Justin Bieber at a private dinner...). The light is quite strong but not blinding and will let us make sure that the pedal is working and check the knob setting while live or in a dark environment. 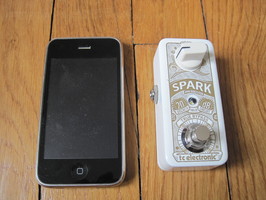 A nice surprise is that we can use the booster momentarily by pressing down the switch and then releasing it when we don't want to use the effect anymore. This might come in very handy when you have a couple of melodic phrases you want to emphasize while playing rhythm guitar. It goes without saying that you can also use it in the classic latching mode. And the switch is pretty quiet. It's embarrassing when you're playing in a bar at low volumes and the clicks of your pedals sound louder than the music... Trust me, I know what I'm talking about.

I was also afraid that I might inadvertently turn the level knob with my foot every time I step on the mini booster, considering that it is almost as big as the pedal itself. There's not thing worst than to have an Airbus A320 landing on stage or to have absolutely no sound come out of the amp when engaging the booster, and just because we accidentally turned the level knob. Luckily, this knob offers enough resistance, which is the most common solution adopted, and it doesn't move too easily.

Like its sibling, and most TC stompboxes, the mini Spark features a True Bypass. It includes a discrete analog circuit that boosts the volume 20dB (or at least that's what it's written on it). 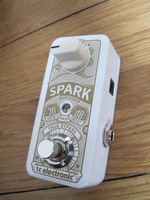 The time has come to see if it's true. To run the test I used a Fender Telecaster Deluxe with a Mesa Boogie Triaxis/2:90 combination, which was in turn connected to a Two Notes Torpedo Live and recorded with an Apogee Duet. The pedal was inserted in the effect loop, where it belongs (placed directly between the guitar and the amp it won't produce the expected effect or might not even have any effect at all).

Let's begin with a clean riff. To record it I have to do miracles: I toggle between the original sound, as is, and the sound boosted with the knob set at roughly nine o'clock, then one third up, then two thirds, and finally all the way up. And I did all that without letting go the guitar (not! I actually did it in several takes...). I must point out that the source level is somewhat weak, because I wanted to make sure that once the booster was engaged my sound card wouldn't clip, which would have resulted in a skewed test.

You'll notice that the sound crunches at one third and afterwards it starts to distort. As a rule of thumb, if what you want to do is only increase the volume of the original sound, setting it to nine o'clock will do the job. Above that the boosting is blatant and the sound loses some definition, since it is overdriving. Some of you might one to experiment with it, but I personally prefer a Tube Screamer for such tasks. At the end of the example I intentionally left the noise for you to hear. With an amp played at high volumes and the LEVEL knob to the max, it's hardly audible.

For the second example we use a crunch sound and the knob set to nine o'clock. It's easy to understand the utility of the momentary mode ─ the effect is on only while the switch is pressed down ─ on a minor blues.

We then have two short phrases, the first one with the knob one third up and the second one 2/3 up, for those of you who are curious to know how the pedal pushes the tubes adding more crunch to the crunch.

We didn't forget about rock rhythm guitar. Here is an example with overdriven sound and the level knob one quarter up. You'll notice that the sound coming out of the pedal is relatively similar to the original one. It doesn't attenuate the highs nor does it enhance the lows, as is sometimes the case. Generally speaking, if you keep to this boost level, the pedal is quite transparent.

Here's an improvisation where I toggle between an originally overdriven sound and the boosted version (set at nine o'clock) depending on my mood. 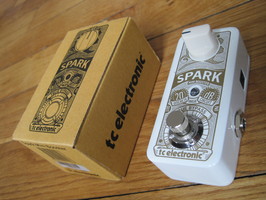 And finally, a Pink Floyd-like example with another TC Electronic's effect, the Hall Of Fame. While recently using our Mini Booster in concert with this same pedal, I realized that, in spite of the reverb overdose, my solos were significantly more defined than with my regular booster by another brand. The actual usefulness of such gear isn't given by how it sounds at home or on some audio examples, but rather how it performs where it should: live. And that's where the Mini Booster won me over.

Its use is quite limited: to increase the volume sufficiently and cleanly, like a real Clean Booster, you should keep the level knob below one third. To actually spark the tubes, above one third. Its simplicity makes me a little doubtful, and I might prefer the original or a real overdrive pedal. Luckily, the price reduction is proportional to the size and feature reduction. With a price tag of €79, it is half-way between the vast majority of boosters, like its bigger sibling, and the very rare less pricey (but also less reliable) exceptions. Given the legendary TC quality, the price seems fully justified. To wrap it up, this TC Electronic Spark Mini Booster is to a guitarist what Viagra is to Rocco Siffredi: it fits in the pocket of your jeans... and will greatly optimize your... stage performances by giving a great deal of potency... to your sound. It has already seduced several big names like Tony Iommi and Pete Thorn (Chris Cornell).