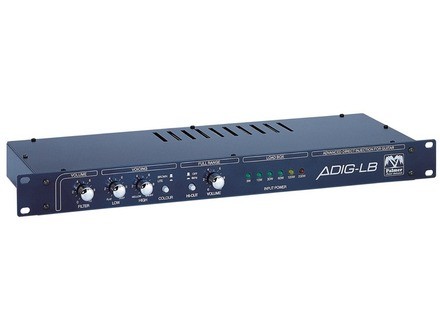 View other reviews for this product:
The Palmer PDI-04 also known as ADIG-LB (Analog Direct injection guitar-load box), is an analog speaker simulator/8 ohm load box.
On the front you have controls for volume for the speaker simulated outs with it's bass and treble control, as well as a voicing switch that simulates the properties of either a closed back 4x12 or an open back 2x12, next to it is the full range control with a high cut switch when using it as line out box. As well as the load level LEDs that let you know how hard you're taxing the box. It can take 120 watts, so running a 70s marshall full tilt will be asking for trouble since those even though they're rated at 100 watts usually put out in the neighborhood of 150 watts when cranked.

On the rear you have speaker in and speaker through 1/4 inch jacks, and 2 1/4 unbalanced outs with separate ground lift switches and a balanced XLR out.

To use for recording heads direct into the board, or loading amps down to use in a rack, wet/dry or wet/dry/wet set-up are the two things I use this for.

Here's where it gets funny...I don't really like its sound as a speaker simulator very much. There are plenty of software choices I think do a much, much better job at that, especially with super high gain sounds. Now having said that, I've been in enough situations where for some reason the engineer always tried to get esoteric on miking the guitar amp, instead of sticking a Shure SM57 on the speaker and then adding room mics to taste they end up with every odd choice for a guitar mic in their mic closet and you stand there thinking to yourself I should just plug into a POD since my glorious tone got completely messed up.
On those gigs I ask the engineer to print a "safety track" which is the Palmer direct to the board.
The end result 9 out of 10 times has always been the same. The Palmer track ends up being used. Now with a good engineer, and well miked cab...there's no need for it.

As a load box line-out to integrate your head into effects/rack set up is where for me the Palmer shines.

I have used it for many years and would buying it again in a heart beat because it has saved my butt many times as a speaker simulator although I'm not fond of how it sounds.

As a line out box it's a must have for me.

For guys that have to have no stage volume but want to run their fave tube amps I highly recommend it as well.
Did you find this review helpful?yesno