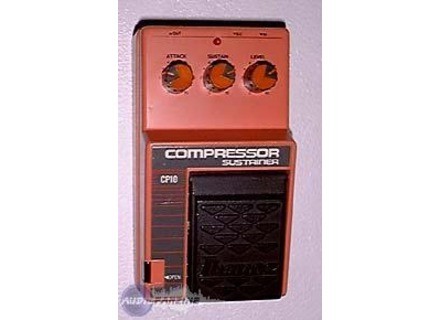 CP10 Compressor Sustainer, Compressor/Sustainer for Guitar from Ibanez in the 10 series.

View other reviews for this product:
This is simply two compressors side by side. It is a clone of the Famous Ross Compressor and the Dan Armstrong Orange Squeezer (Ross OJ). This is an all analog device. There is just three knobs for the Ross (attack, sustain, level) and just a level know for the squeeze. No computers necessary. This is simply one 1/4&quot; audio in and one out. It is not rackable, it is a pedal.

The setup is very simple. Simply adjust how much attack, how much sustain and the level for the ross. You only get to change the level on the OJ. This thing will squeeze and sustain the crap out of anything. Its great. I never got a manual with this, and I would never expect the need for one.

I have been using this pedal for one year and have been very happy. I love the crunch you get out of this thing and the sustain is clear and long. The only thing that I don't like is how much noise it makes when you turn on both the ross and squeezer at the same time, but this is the nature of a compressor, not much you can do about it. I used to own a boss stomp box compressor, but I hated it. It sapped all my tone up, but the bi-comp is nice and transparent. It is $265 with a year waiting list, but if mine was lost, or I didn't own one, I would sign up right now!