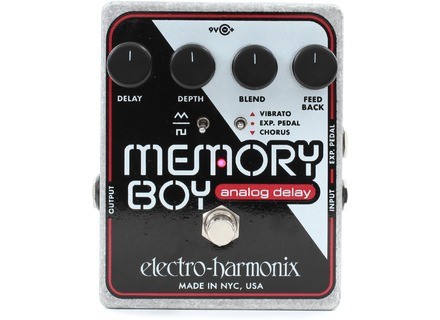 Memory Boy, Delay/Echo/Phrase Sampler for Guitar from Electro-Harmonix in the Memory series.

Buy this productView price information >
View other reviews for this product:
This is a delay pedal format that offers multiple functions. Indeed, one can add a chorus or vibrato, which is actually a modification of a wave repeats either "niche" (square) or sinusoidal (although I specify two types of waves that are not involved in Likewise the sound).

It is fully analog. Input jack, output jack, input for an expression pedal.

Here, we enter the interesting part.
The first time we touched, and if you have never touched a delay of his life is a mess. Anyway, half an hour with little manual one page front / back and it&#39;s in the box! ... Finally, in the box, you may not store it in here earlier this pedal.

With an expression pedal or can change the modulation speed or the speed of the delay depending on the mode selected.

All these features offer a huge range of sound.
- You can easily use the delay to have an echo of what we play (minimum depth), or as feedback to a minimum and some delay which will produce a rapid repetition (listen to the intro of "Race: In "Battles by to see what I mean).
- The vibrato and chorus can also be used to sculpt the sound of a few repetitions of the delay, which can be very interesting. I use a lot of vibrato for some bass solos hovering in my group of psychedelic rock / shoegaze, and it brings much richness to the sound.
- Alternatively, you can create effects quite crazy, especially with lots of modulation and blend thoroughly, or altering many repetitions (including a set rhythm dry enough, rehearsals give an effect of fluctuation rather strange). With the expression pedal can create sounds quite "fast" with the wave window and vibrato, pushing up the speed modulation, the kinds of special effects quite nice. In contrast with very little speed, we will have the effect of a kind of "clang" on certain notes, which can be very interesting to give one side a "defective" in some riffs.

You can get a panel of his very interesting, it&#39;s going to a simple delay, echo more "material" and sculpted by vibrato and chorus effects, or even (and especially, for my part) of the experimental sound pretty cool .

I use it mainly on bass (sometimes guitar), frequently in combination with other effects such as the Bass Big Muff and Small Clone. I&#39;m pretty plugged shoegaze / drone and experimentation, I created with this delay often large masses of sound, quite impressive with a big fuzz, chorus, guitar plugged on bass amp. You can also enjoy a good reproduction of sounds by combining kitsch niche in the chorus of the MB, the type of beeps typical series of 70&#39;s science fiction!

This delay by quickly self-oscillation (about two thirds of the feedback is depending on the delay time chosen) which can be very interesting, but also a little time for binding, although it m &#39; has ever been a major problem.

I use it since July 2011 (I write these words in January 2012).
I had already tested some delay, particularly digital, but I bought the Memory Boy because he is much more than delay. It enables true sound research as few effects pedals allow. I do not claim to "fan" of Electro-Harmonix, but they are so innovative while keeping one hand vintage that I do not see how not to worship their products.

Really, this small gas plant is a real instrument that can enrich your compositions, so I based some songs on the use of this delay. It develops its full potential with an expression pedal (an M-Audio at € 20 for my part).
I find the quality / price ratio good enough, as it has become one of my favorite instruments (although as a rule I always find the pedals too expensive, but it ...).

Of course, this pedal is not for someone looking for a delay perfectly clean, for it must be digital or analogue then the MXR in the same price range (which is used by the guitarist Tame Impala including the song "Alter Ego").
However for anyone who likes the sound "old school" just filthy, and feels the soul of an explorer sound is perfect.
I think buying the Memory Boy With Hazaras soon as it has other functions just as interesting (oh what, can we not have a delay at the same time, ask the guitarist Sightings what he thinks!)
Well, I hope you will notice served!