The Next Big Thing in Guitar Distortion

Not only does it give a smoother effect with guitar, it's a useful tool for drums, bass, and believe it or not, program material – some people (you know who you are!) have even used it with mastering to add a distinctive, unique "edge."

As far as I know, the first example of multiband distortion was a do-it-yourself project, the Quadrafuzz, that I wrote up in the mid-'80s for Guitar Player magazine. It remains available from PAiA Electronics (www.paia.com), and is described in the book "Do It Yourself Projects for Guitarists" (BackBeat Books, ISBN #0-87930-359-X).

I came up with the idea because I had heard hex fuzz effects with MIDI guitar, where each string was distorted individually, and liked the sound. But it was almost too clean, yet I wasn't a fan of all the intermodulation problems with conventional distortion. Multiband distortion was the answer. However, we've come a long way since the mid-'80s, and now there are a number of ways to achieve this effect with software.

Like multiband compression, the first step is to split the incoming signal into multiple frequency bands (typically three or four). These usually have variable crossover points, so each band can cover a variable frequency range. This is particularly important with drums, as it's common to have the low band zero in on the kick and distort it a bit, while leaving higher frequencies (cymbals etc.) untouched.

Then, each band is distorted individually (incidentally, this is where major differences show up among units). Then, each band will usually have a volume control so you can adjust the relative levels among bands. For example, it's common to pull back on the highs a bit to avoid "screech," or boost the upper midrange so the guitar "speaks" a little better.

With guitar, you can hit a power chord and the low strings will have minimal intermodulation with the high strings, or bend a chord's higher strings without causing beating with the lower ones.

The first multiband distortion plug-in was a virtual version of the Quadrafuzz, coded as a VST/DX plug-in by Spectral Design for Steinberg. Although I was highly skeptical that software could truly emulate the sound of the hardware design, fortunately a guitarist was on the design team, and he nailed the sound.

But they took it further than the hardware version, offering variable frequency bands (the hardware version is "tuned" specifically for guitar), as well as five different distortion curves for each band, from heavy clipping to a sort of "soft knee" distortion. As a result, it's far more versatile than the original version.

A free plug-ins, mda's Bandisto, is basic but a fine way to get started. It offers three bands, with two variable crossover points, and distortion as well as level controls for each of the three bands.

There are two distortion modes, unipolar (a harsh sound) and bipolar, which clips both sides of the waveform and gives a smoother overall effect. 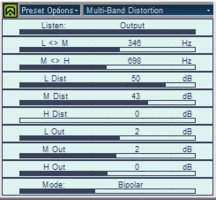 While the least sophisticated of these plug-ins, you can't beat the price. It's as good a way as any to get familiar with multiband distortion.

Ohm Force's Predatohm provides up to four bands, each of which includes four controls to change the distortion's tonality as well as the channel's overall tone and character. Unique to Predatohm is a feedback option that can add an extremely aggressive edge (it's all over my "Turbulent Filth Monsters" sample CD of hardcore drum loops), as well as a master tone section.

Wild, wacky, and wonderful, this plug-in has some serious attitude. Under its spell, even nylon-string guitars can become hardcore dirt machines.

iZotope's Trash uses multiband distortion as just one element of a comprehensive plug-in that also incorporates pre- and post-distortion filtering, amp cabinet modeling, multi-band compression, and delay. The number of bands is variable from one to four, but each band can have any one of 47 different algorithms. Also, there are two distortion stages, so you can emulate (for example) a fuzzbox going into an overdriven amp (however, the bands are identical for each of the two stages). The pre- and post-distortion filter options are particularly useful for shaping the distortion's tonal quality. 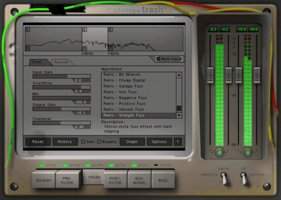 This doesn't just make trashy sounds, it revels in them. Sophisticated trash may be an oxymoron, but in this case, it's appropriate due to the complement of highly capable modules.

You're not constrained to dedicated plug-ins. For example, Native Instruments' Guitar Rig has enough options to let you create your own multiband distortion. A Crossover module allows splitting a signal into two bands; placing a Split module before two Crossover modules gives the required four bands. Of course, you can go nuts with more splits and create more bands. You can then apply a variety of amp and/or distortion modules to each frequency split.

Yet another option is to copy a track in your DAW for as many times as you want bands of distortion. For each track, insert the filter and distortion plug-ins of your choice. On advantage to this approach is each band can have its own aux send controls, as well as panning. Spreading the various bands from left to right (or all around you, for surround fans!) adds yet another level of satisfying mayhem.

Here a guitar track has been "cloned" three extra times in Sonar, with each instance feeding an EQ and distortion plug-in. These have been adjusted, along with panning, to create multi-band distortion.

Thanks to today's fast computers, sound cards, and drivers, you can play guitar through plug-ins in near-real time, so you can tweak away while playing crunchy power chords that rattle the walls. Happy distorting!