In this second installment dedicated to dynamics processing during mixdown, we'll take some time to discuss the whys before moving on to the hows.

In order to make the best of this high-powered tool called compressor, it's key to consider the variety of uses it offers. If you were to ask a newbie "what's the use of a compressor?," chances are he or she would reply "to sound louder, obviously!," without giving it a second thought. While this answer wouldn't be entirely incorrect, it is reductionist to say the least. In fact, the list of possible applications includes much more than simply getting a "really huge" sound.

Let's start by looking at things from a macrodynamics point of view. A compressor allows you to make the sound of an instrument denser and more consistent throughout the entire song, which keeps it from disappearing during the busiest passages and from standing out too much during quieter parts.

Compression can also help minimize the playing "defects" or "mistakes" a musician made during recording, like erratic volume changes from note to note when playing a bass line or the untimely movements of a musician moving back and forth, away and towards a microphone, which result in variations that are clearly audible in the take.

Compressors are also excellent at highlighting details of a musician's playing. Think about that famous sigh at the beginning of Jeff Buckley's Hallelujah. Or the electric guitar during the chorus on Radiohead's Nude, where you literally have the impression of feeling the strumming of the pick on the strings.

At the same time, you can smoothen out or highlight the dynamics of a track in order to make it stand out or step back in the mix. It is even possible to reinforce the lively aspect of a performance or, on the contrary, make it as mechanical-sounding as possible. 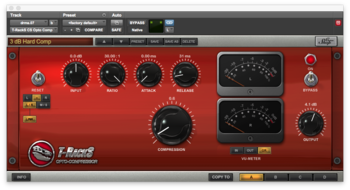 Let's see now what can be done at the microdynamics level. A compressor is capable of radically restructuring the dynamic envelope of a sound, to the point that the timbre of an instrument can be modified. This can be useful to add some punch or inject some dynamism into it, to accentuate or reduce the sustain, or even to make a virtual instrument more human.

Finally, a compressor can also be used in a creative manner. It's not unusual to exploit its "side effects," like distortion or pumping, in an aesthetic way. On the other hand, some units feature a sidechain function that offers myriad possibilities, both technically and creatively speaking.

It should be clear by now that a compressor allows you to have a remarkable control on sound. I will obviously address the cases I mentioned above with examples so that you can learn to master them. That said, I'll start by making you familiar with the main parameters of a compressor. So, see you next week for some new adventures with compression!