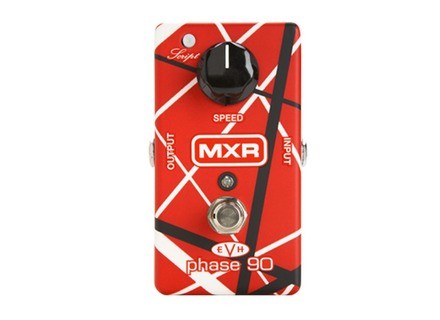 Buy this productView price information >
View other reviews for this product:
This is a simple pedal at face value, and in truth it is very simple. Just one knob? Well that's all you need. It's a phaser...sort of. And there's no need for a ton of parameter knobs with this pedal. Because it's not trying to be all phasers at once. It knows exactly what it is.

Seems solid enough. MXR boxes are generally a cut above everything else in their price range. But these days if you don't have metallic housing and metal switches, most people won't bother. The large knob is a nice feature on a lot of these style pedals. MXR gets high marks for ease of use and reliability here in my book.

Here's the thing. This is not a traditional phaser. Yes it does have that 80's jet engine thing going on. But you would expect this since it is after all the EVH phaser and his whole sound is basically a very flagrant thick jet style phaser. It's definitely not subtle. If you want a musical phaser or a vintage style one, this is not your pedal. If you want the EVH solo phase tone this will get it. It also does that crazy 90's phase that you hear so much in grunge rock stuff. Here's the thing though, it also has a lot of chorusing going on, and for that it's not just a true jet phaser. It's honestly a bit of a unique effect. Want a vintage phaser that sounds simpler? Get EHX or a more boutique offering. People say this thing sounds a lot like a script logo but I don't hear it. The script is way more subtle.

About the only thing it could use it some sort of tempo control since it's heavy on 'swirls' as some people call them. But using the single knob you can get about any territory you need. This isn't a do it all phaser by any means. But a lot of people, not just EVH fans seem to love it. I personally like it a lot for some solos and wacky passages. Outside of that I rarely use it. I'm not a phase nut anyway. For the price it's pretty good. Not an insane deal but you do get what you pay for.
Did you find this review helpful?yesno