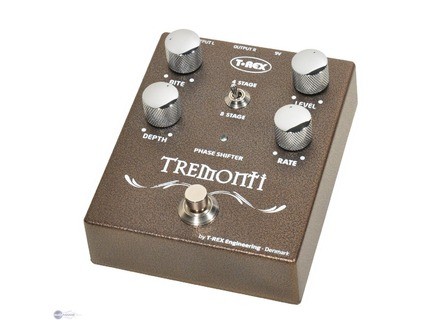 T-Rex Engineering has announced the Tremonti Phaser, which is described by the brand as "a classic phase shifter for our time".

T-Rex has collaborated with Mark Tremonti, formerly of Creed and currently the guitarist for alternative rock band Alter Bridge. Aimed at "setting a new standard in phased sounds", the Tremonti Phaser is said to deliver all the classic warped, swirling, twisted, spacey sounds that one can expect from a stompbox of that kind.

Controlwise, the Stage switch lets users choose between a raw, vintage-sounding effect, and a richer, more modern swirl, while the Bite knob is said to add an overdrive edge to any setting. According to T-Rex, all settings (fast or slow, deep or shallow, vintage or modern) are quite usable for anyone aiming at taking his playing to another world.

Due to be presented publicly at next January's NAMM Show, the T-Rex Tremonti Phaser will then be released Mid-March 2009 at an MSRP of 249 Euros.

More details as well as a video demo are already available from the brand's website.