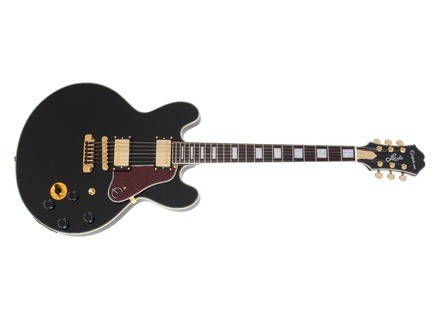 +
Epiphone B. B. King Lucille

Buy this productView price information >
View other reviews for this product:
This guitar was made in Korea, though Epiphone is originally an American company. This guitar is equipped with Varitone humbuckers, which are interesting because of their ability to switch from single-coil sounds to humbucker sounds. The guitar has 4 knobs, two each for volume and tone. There is a 3-way pickup selector switch. The guitar has a maple body and neck, and the fretboard is made of rosewood and has 22 frets. It has a TP-6 tremolo piece. This guitar is notable for being a "replica" of blues legend BB King's guitar "Lucille".

This guitar plays pretty well. I do enjoy the sounds I get out of it sometimes. It's made for blues playing, and I must say that playing that genre is definitely easier on this guitar than intense Jazz or country. For some reason moving around on complex chords has been difficult for me on this guitar. I haven't had a problem with ergonomics, the thing isn't too heavy or light. It's easy to reach the frets and hit those top notes because of the cutaway on the lower part of the neck.

I feel like I was expecting too much out of this guitar. When you claim to be based off of BB King's famous guitar, you should come correct at the end of the day. While I did think that the pickups on this guitar were cool because you could switch from single-coil to humbucker instantly, I was hoping that the pickups themselves would sound better. Neither tone sounds great (though the humbuckers are better). I was also thinking for some reason that even though the guitar is based on a Blues legend, it wouldn't be inconceivable to play Jazz or Country on it. But I don't think that the tone is particularly great for anything other than blues, and even then, it's not amazing in any way. Mostly bland, not enough raw feeling coming out of the guitar.

I think that this guitar is mainly made to capitalize on BB King's name. It's not that much of a quality guitar. It's also not that expensive, even new, so I guess that's why it isn't too impressive. I guess if you're a blues fan who just started playing, it might make a good purchase. I wouldn't recommend this to an advanced or intermediate player though.
Did you find this review helpful?yesno