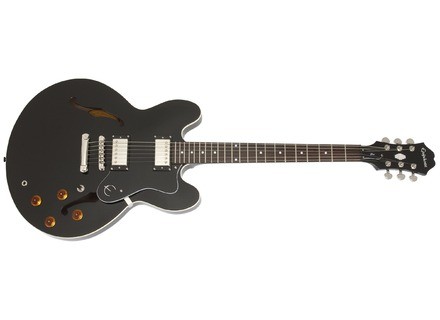 Buy this productView price information >
View other reviews for this product:
I got this guitar for $440 with a nice Epiphone hardshell case at MARS in Maryland while on a business trip. I bought this guitar because I was looking for hollow body electric that I could play acoustically and I really liked the tone of this axe.

I really like the color, it's the all natural finish. I also like the sound of t his guitar, it goes from pure blues to jazz with little or no adjustments on the tone controls. I also like the how the guitar feels when I play it. I'm used to playing Strats and Les Pauls, but this one fits right in the middle of the two.

The pickup switch is really cheap and the second day that I had it, it quit working. I managed to get it working again by sticking my finger in the sound hole and moving the wires around. It comes with .9 gauge strings which I managed to break within the first 20 minutes of playing. A second set of .9's lasted two days before breaking again.

The overall quality is pretty good. I looked hard for flaws in the workmanship but could not find anything of note. The jack was loose, but a pair of pliers fixed that problem. As I have already stated, the toggle switch is a joke and it's getting replaced along with the nut.

I would purchase another one if something happened to this one. For the price, you just can't go wrong. A few of my friends have one and they just love them. I'm a big B.B. King fan and I always wanted a guitar like his, so this is the one, it may not be a real Gibson ES-335, but it works for me.