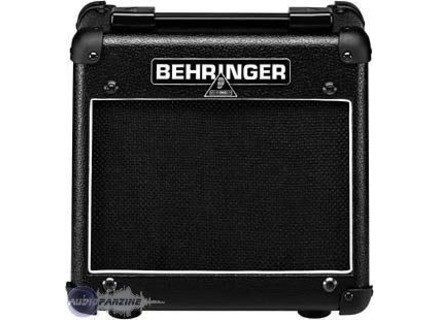 View other reviews for this product:
- Preamp tube ... see above there ... not a single regret medium setting ...

- No need of manual ... simpler settings.

I was looking for a small amp to play with me ...
Then, I tested this amp first in store, with the original lamp ... I actually had a buzz after some time ... for the actual sound, this is the amp that I ' I preferred in this power range ... I tried a roland cube 15 x 15 tb a Ibanez and another behringer to modeling, I do not know which .... being perfectly honest, the cube I roloand turned it off after 5 minutes, I had wanted to fire him after 30 seconds ... idem Ibanez within seconds ... with behringer modeling, I finally began to regain the sound of my guitar ... with the AC-108 that was confirmed, a touch of warmth and more .. and buzzz ... not really disturbing, especially since I already had the idea, if I took this amp to replace the lamp! I expressed my opinion to the seller who seemed to wonder if I had not crap in the ears ... I confirm, no, I have none! I decided to buy the amp, on an online sales site veeeeeery known ... I also ordered an electro harmonix lamp .... 68 euros amp + lamp + shipping .... so that 'store the amp (with the original lamp) was 123 .... I had a little apprehensive replacing the lamp ... did not test right now my new amp customized with MA guitar (setting at the luthier) tried once with squier ... more buzzz ..... then I just grab MA guitar, an Ibanez have 103 ... not only more buzzz, but the sound is waiting for you! I adooooooooooooooooore !!!!!!!!!!!!!! Satus big fans of death metal made in, forget it! in my opinion! ... but for those who love vintage sounds of 50-60 years, or even 70, clear, warm, knowing that it is a 15 watts and you may wake your neighbors or the block, rush the beast! and understeer lamp ... I put 9 because of buzzz of the original lamp. 9.5 with the new lamp ... because there is certainly still room for improvement ...

With my Ibanez AS 103 newly adjusted (endless fun!)? ... for 3 hours.
I just regret setting the medium but playing with the knobs of the guitar and the amp, I find my happiness. I have connected a reverb pedal, it gives a little extra.
I've plugged my guitar on a lot of amps, transistor, lamps on software amps .... obviously on a whole 100-watt lamps, there is no photo! but comparing with other 15-watt combos and knowing that I did not want to blow the windows of the building and my main concern was to find a low power amp, clear and warm and sensually crunchy, then I say yes I would do this choice eyes closed! Uh think anyway to change the lamp, it gives another more ... the buzz was tiring in the long run ... and sound gaining clarity and heat.

Added after more than one use, the lamp farted ... my ace-103 was stolen ... am redeemed me from af-125, not the same thing, too typical jazz ... I m ' separates .. and radically changes course, although I like the Lag (two acoustic increased my hands, only the "Gibson Lennon" had something more, but the price is not at all the same) roland cube 30x suits me too.
Come on, 6.9 ac-108 if you like tinkering