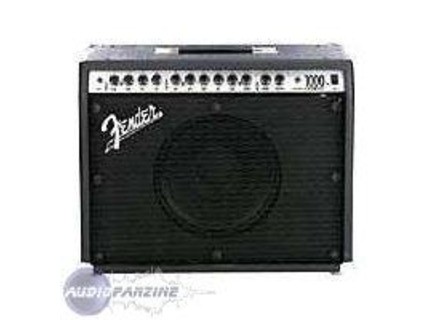 View other reviews for this product:
I can't tell you how many Fender amplifiers that this company has built and its existence but I can imagine there are a lot more than I am aware of. This is a simple little amplifier that has three channels of operation. You have a normal clean channel and you have to dedicated gain channels or crunch channels. It's a nice little amplifier for someone is looking for a decent little combo to get the basic Fender tones with. They're not very expensive and they had a pretty good sound for what they are. This is not to be an amplifier that is going to contend against the Fender twin reverb or any other major baseman type amplifiers but it will be a nice little practice amp for someone who needs a cheap amplifier.

This amplifier basically has 100 W of power and it's pretty stinking loud for solid-state type amp. It comes with its basic Fender 12 inch speaker and it doesn't really have much else to say other then it's a pretty basic Fender amplifier. You get the normal channel on channel switching options as well as a reverb and adjustable effects loop. As a mix control and line output to go directly into PA system or your recording setting. This amplifier is I'm cheap amplifier if you can grab it but I wouldn't spend too much time going accurate.


The tone of this amplifiers pretty much Fender all in all but it's not going to be a great distortion amplifier so if you're looking for a decent gain tone and this is not ambient. If you needed decent clean tone then this is a pretty good amp for as most Fender amplifiers are for their clean sounds. In my opinion this is not that great of an amp if you're looking for a mobile multiple channel amplifier because the extra channels just sound like trash has most Fender gain or distortion channels sound. I never liked a Fender distortion channel out of any amp they've ever done other than the new EVH amplifiers which are a completely different beast all around.


You can find these used pretty easily and if you look hard enough you can even find the head versions if you're needed that style of amplifier. They did make this in the head as well as this combo so both of them can be found well around the range of $100-$200. I really don't recommend this amplifier to anyone because it just doesn't sound that good for all that has as a option on this amp. It has a good clean but so do a lot of other amplifiers and so if you're looking for multiple channel amplifier particular and then this is not to be the one for you.
Did you find this review helpful?yesno
Cookies help us improve performance, enhance user experience and deliver our services. By using our services, you agree to our use of cookies. Find out more.