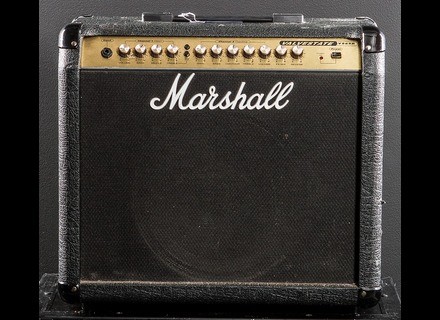 View other reviews for this product:
2 Channel Valvestate Marshall Amp. Tube in the preamp with a solid state power amp, and a 12' Speaker. Looks like a classic Marshall in combo form. Volume and Bass/Mid/Treb on the clean side with a 'Tone Shift' that notches the treble EQ to a higher frequency for a more glassy tone. Then Gain Bass/Contour/Treble on the Overdrive Channel. Rounded out by Master Volume, FX Mix, and a Reverb knob. Comes with footswitch and power cord. I dig the gold front panel too. Kinda looks professional. As a musician I've been largely a bassist and a keyboard player, but I've also played a fair amount of guitar in my day for sure.

I got it for $150 in a package deal with an Ibanez RG570 from Chris, the owner of Music Gear Review. I got it because I was getting into guitar pretty heavily (it was my first fretted instrument) and I really wanted to get an electric setup, mostly because I longed for that distorted sound that I just couldn't get playing my acoustic or the nylon jobs at the Convent where I took lessons (don't dock it...those Nuns were really good players).

I like the smoothness of the reverb that isn't overbearing. It's a spring reverb that doesn't ring out too much or sound like somebody dropped the amplifier like some other tube amps can get, I think. I also like the clean tones I can get. I think Marshall picked the frequency centers well for the EQ, so your guitar sounds warm, but just a little punchy. The distortion sound is VERY traditional JCM Marshall tone, too, and I'm still very impressed with it after almost 10 years of using it. I played a Les Paul and the Ibanez through it for a long time, and both felt very present when playing solo.

...but when I wasn't playing solo, the amp didn't seem to have much presence to it, and like Chris has said about it before, it really didn't have much underlying bass to it's sound, either. It just doesn't feel like a full 65 watts. And the tone shift on the clean channel makes your guitar shimmer...but it can also make your guitar sound like it's being sampled through a cat clawing a chalkboard as a scratching post. Not that great at all. It just needs more balls, more presence, more punch, and it'd be a great amp. Maybe it needs tubes in the power section, too, but this is just...kind of a downer in the long run.

No complaints here. I take care of my equipment. And this Marshall has stayed perfectly in one piece in return.

I'm really disappointed in the overall sound of it. Sure, it sounds great in a practice room, and it can feel awesome just jamming in your room, but take it out on stage, and it just gets lost in a mix that you can't dig yourself out of. It's kind of a disappointment overall, although it has redeeming qualities as a practice amp. So I give it a 2.