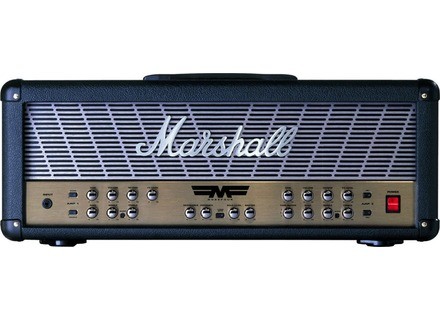 View other reviews for this product:
Hybrid Amplification: 2 tube preamp, power amp transistor
Power: 350 W (half would have been sufficient)
entered loop "effect, the ability to connect 8 or 16 ohm speaker.
Common setting in two preamps: Master, lead boost, presence, resonance.
2 preamps with EQ.
Preamp 1: the clean and crunch with adjustable bass, mid and trebble for each, volume and gain common digital reverb, key scoop to dig the media (effective).
Preamp 2: Overdrive 1 and 2, same config as a preamp plus an adjustment for restructuring Tone Matrix mediums.
All controlled by a large 6-button footswitch, look really sturdy (notably the cable is baucoup larger than other pedal Marshall).
The config looks good, the whole is consistent, readable, and gives a good appearance quality.

As I said just before, the configuration is simple, no need to leave central to understanding the operation of the amp ...
The EQ is effective for a Marshall, there&#39;s been progress.
The manual is clear, in several languages ​​including French ... whew
So far, nothing to say, it deserves Sept. 1

The sound now, which is clearly denigrated by many users of AF ... then go to Caesar what belongs to him.
I said before I use this amp for 1 1 / 2 years with his cabinet MF 400 A, in my opinion indspensable to make the big sound and a Les Paul Classic ...

Preamp 1
Its clear channel 1: Here is the first surprise, Marshall had accustomed us to clean sounds flat, no real dynamic mode oven sounds clear to him really effective. The settings allow to obtain sounds slamming baucoup more and clean (you might say it&#39;s good, this channel is dedicated to that) than the other amp in the range, or round and large (with the neck pickup). On the other hand, equalization appears to be effective without being (too) sensitive, the sound really changes when you turn the knobs. 1 point for Marshall to clean.
The crunch channel 2: Small flat for the crunch, to my taste it more saturated than it crunch, I think you get the real crunch by staying on the clean channel gain and pushing the bottom ...
I should point out though that with my guitar and microphone ceramics, perhaps the plateau so the crunch a little too saturated.
The sound is a little too aggressive, it&#39;s a metal crunch ... if pressing the scoop, the saturation effect appears even more aggressive and sound can be felt ... The metalheads will be pleased, my personal, I&#39;m not too pleased.
Little note: a separate gain for the clean and crunch would have pauffiner very effective settings and would probably solve the pb mentioned above, in fact, if we use the sound as much like me clear that the crunch, it is necessary to compromise its volume to stay the same for both ...

Preamp 2:
Channel 1: Saturation classic Marshall type can be found the sound of gun&#39;z, Led Zep, it&#39;s good rock 70&#39;s, 80&#39;s or 90&#39;s ... Personally, it&#39;s the channel I use the most, I find that the distortion is really good and the gain and EQ setting for finding a good sound.
Channel 2: Contrary to what I read, this channel is REALLY different from above, here we are in the den of neo. any chord takes a dimenssion extreme, it&#39;s nice when playing alone, baucoup least when you&#39;re in groups because the mix quickly turns into soup and low gain, is less precisely not to put too much gain ... then the sound becomes exploitable, large, aggressive and gains in precision. Anyway Personally, I do not like group, but you still have to admit that the sound is huge ... nothing to do with a JCM 900 transistor as I have read, the sound is baucoup baucoup more ... Basically, with the key and scoop the mids and you dig is the fourth dimenssion, we get a sound very modern.
Setting Tone Matrix, I find it effective, little change despite the different positions.

So I think the sound is rather nice in a clean and overdirve, crunch and overdrive a bit disappointing two unusable for my taste (that said, I do not play neo). It was not just the heat of a lamp, it is clear, but the sounds are good and expressive baucoup possibility of following its channels, you just spend time looking for the sound (which I think baucoup have not tried)

The reverb is very effective, the presence and resonance settings can give even more aggressive sound (though the amp was enough like that), and lead can boost it out qd is a solo ... practice
Weakness: gain common to both channels preamp ... damage, I put a 7 in the overall rating because of these connections because I do not like to compromise with my sound.

I use this amp for 1 year and 1 / 2.
I love his face, aggressive ...
I find the amp much, and I really regret that gain common two-channel ... In addition, 350 W, it is absolutely unnecessary, repeating or in concert, I have not mounted the master more than 1 / 3. But who knows, maybe one day at Stade de France

In hindsight, I think I do not reffer this choice, and now the amp is for sale with his pregnant ...
I put an 8 in global opinion because I think all still pretty cool and fun. I&#39;m surprised to see so many people to murder, it is clear that it is expensive, too everything from the lamp, but it&#39;s not a bad amp, on the contrary ...
See the source
Did you find this review helpful?yesno
Cookies help us improve performance, enhance user experience and deliver our services. By using our services, you agree to our use of cookies. Find out more.