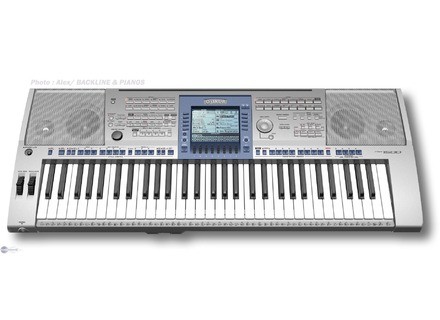 PSR-1500, Keyboard Arranger from Yamaha in the PSR series.

View other reviews for this product:
- Keyboard Arranger
- An output device to USB (to connect a USB key, a floppy drive - provided !!!!, etc ...)
- 1 x USB to host (for connecting a computer)
- Output MIDI IN / OUT DIN 9-pin (to connect an expander for example, or a MIDI sound card, another instrument, ...)
- 790 sounds about ditables! (Not just adding effects, you can change the basic paramtres as the attack, the shape of the wave - not as pushed a synth but it is a good intro)
- Enormment paramtrables individual effects (presets Rverb and Chorus - Hall, Room, Water, ..)
- 16 tracks Squenceur trs intuitive user
- Can import files very easy. MID. KAR using the USB key or USB floppy disk drive, view and edit the partition, etc ...
- Sets the tempo of Possible by tapping a button prvu this
- And many others not yet explored

- I use it for 2 months now, the sounds are excellent (lgrement the notes of piano bass and Aiges - for cons, the bass and Aiges are striking of Ralite!)
The BMOL, especially default my purchase I think, the key dernire (Do the following five octave - key 61) is lower than 2 lgrement millimtres compared to other , so the VLOC is worse on this dernire.
- I like particularity: Polyphony 96 notes, and can assign two sounds at the same time the keyboard Notes on the same split +
- Particular feature that I like least: 61 keys, but trs common in this price range
- I tried the cheaper keyboards including Korg PA-50 is ergonomics, simplicity and class of the interface, the modern devices of playback / recording (USB, card reader Smart-Media) that I take the DCID PSR1500.
- Report qualitprix: neither good nor bad
- With the exprience, yes, I would do this choice for an arranger to have a default Piano numrique for lack of space ...
See the source
Did you find this review helpful?yesno
Cookies help us improve performance, enhance user experience and deliver our services. By using our services, you agree to our use of cookies. Find out more.