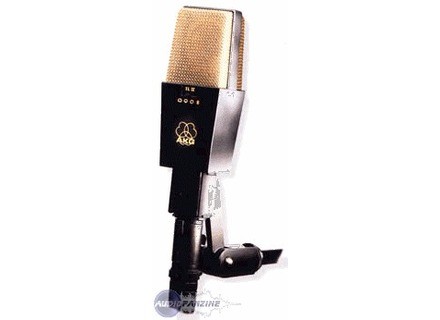 View other reviews for this product:
The 414 B-TL II is a version of trs diffrent 414 B ULS.

Used for 3 months.
The "prsence" of voice is remarkable. The voice appears naturally in the mix, do almost no ncessite four (most of the time I leave compltement law and let the magic oprer ...).

The strong point is that the sound is not aggressive, despite a curve rponse significantly increases the 8k (whistling classical) and 11k (prsence hump), but mod re on the 2.5 or the voices that make 3k nassillardes or aggressive. The bass is not Submitted excs, farms and prcises. The mdiums n'agreessent not. The highs are a precision and a brilliant always stunning, and the bump classic 11k prsence always effect for improved sharpness.

Tip: never save a singer by placing the cell in the axis of the mouth with such a microphone, your exact would be too aggressive. INTERESTED position is the position of the eyes or forehead, to the mouth, at least 20 centimtres (to avoid an effect of proximity often indsirable).

The report is not too qualitprix Whereas for such a micro, which Representative for me an advantage taken in the standard of singing.

DEFINITIONS IDAL the microphone in a trs many situations.

The default: uh ....... its price??
See the source
Did you find this review helpful?yesno
Cookies help us improve performance, enhance user experience and deliver our services. By using our services, you agree to our use of cookies. Find out more.