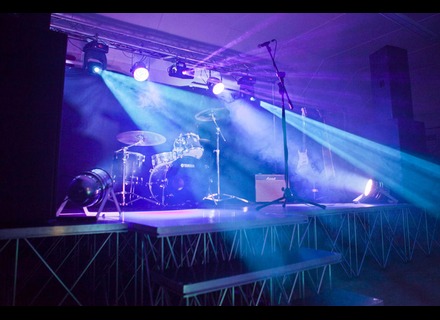 As a guitar player, you have many possible roles in a live situation. You might strictly be a rhythm player, you might also play lead, or you could even be the front person for the band, in addition to your guitar duties. But whatever your function is is, paying attention to the concepts discussed in this story will help you be more successful as a stage guitarist. Let’s check them out.

Be a team player

Remember that you're part of an ensemble, and your parts need to work in tandem with the other musicians in the band. If there are two guitarists, and both of you are playing rhythm at any point during a song, your parts should complement each other, not clash. When you’re working out parts at rehearsal, try playing chords in different registers to avoid muddiness, or with different inversions, or with one of you arpeggiating and the other strumming. Take a similar approach if you're playing with a keyboardist. Bottom line: be unselfish when it comes to working out parts for your show.

Keep your volume under control

Yes, we all want to be in the spotlight, but that doesn't mean you have to blow the ears off the rest of the band — not to mention the audience. Part of being a team player (see previous) is blending in sonically. Keeping a moderate stage sound is almost always a big challenge for a band — if you turn way up, the rest of the band will compensate, and before you know it, the sound will be out of control. So don't further the stereotype of the stupidly loud guitarist — be only as loud as you need to be.

Let’s face it, between our guitar strings, our pedalboards, and our amps, we guitarists have a lot of gear to deal with, and there’s lots of potential for things to break. To minimize the chances, change strings regularly and bring extra strings, picks, batteries, and cables to your gigs. What’s more, if you have a pedalboard with individual pedals on it, make sure it stays in good shape. If you’re hearing crackling or other odd noises, check the cables and find and replace the culprit before the show. It’s a bummer to interrupt the set as you change a string or troubleshoot a sound issue with your effects, so keep ahead of the gear gremlins.

There are few things more annoying than a guitarist (or other musician) who noodles in between songs. You can make much better use of your between songs time by silently checking your tuning. If you must audition your sound because you're changing settings, play a couple of quick notes or chords, then be quiet until the song starts.

Keep your solos short and sweet

Unless you’re in a jazz or jam band, try not to overdo the length of your solos in open-ended soloing situations. If the song allows for an extended solo, great, but remember you’ve got to keep the audience’s attention. Build it up, bring it to a shattering climax, and leave them wanting more. Another stereotype we don’t want to perpetuate is that of the guitarist with an out-of-control ego who won't stop playing.

With all due respect to shoegazers, audiences like it when you engage them by making eye contact, moving to the music, and generally acting like you're into it. If you’re staring at the ground with your eyes closed looking like you’re contemplating which diner to go to after the show, you’re much less likely to get the crowd’s attention. Show that you’re having fun, and the audience will respond.