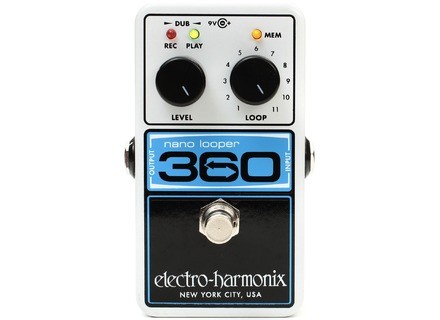 Electro-Harmonix adds to its Nano Series the Nano Looper 360 pedal.

The Nano Looper 360 is Electro-Harmonix’ alternative to the TC Electronic Ditto Looper of the new Boss RC-1 Loop Station introduced this week.

The Nano Looper 360 allows for recording during up to 360 seconds and store up to 11 loops to the internal memory. The recording is made is 24-bit / 44.1kHz audio format and you’ll find the usual overdub, undo/redo, delete and play controls.

The pedal features two knobs to adjust the level and choose on of the 11 memory slots/loops. All the other actions are performed via the built-in footswitch.