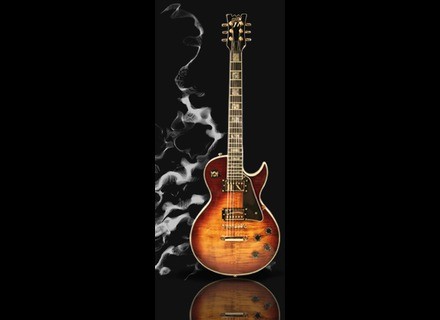 Value For Money : Excellent
View other reviews for this product:
Made in Korea.
Table Saddle flame ouaho this class.
Mahogany I believe? JEnter more.
Touche bne is too much a ^ ^ is smooth and the game can be fluid.
Tobbaco color burst is very dark in real life, rather than on the photo site, but is not ugly, it gives a warm cot that makes you want to play on stage and it changes from black that everyone takes .
The agreement seems to hold my compartment Kay Premire and my only other guitar.
The handle, a handle bah c rounded, as on my kay, in just over pais, large hands should there be more comfortable for ptites hands like mine is hard but doable you inqui Tez not. Worse was part of a good spirit Gibson that big and that big wooden stick that seems to be more a "handle late 60s typ."
For rglages are four buttons, they all seem to work, and the selector can adopt three positions.
Ebene is the price the same when c hallucinating. 517euros with ports.

The use is not comfortable unless trs large hands and be shed. It is a craft vritable pais 4kilos 500grammes of pes on balance, even if heavier. Comfort is not too Submitted for ptites hands is a shame. But I think it&#39;s a Gibson Les Paul ^ ^. It&#39;s not a handle end, flat and enjoyable as anything on a PRS. The guitar is really Paisse is impressive. CHAC is an acute fear to drive more than a PRS (I have a buddy has an SE Singlecut) but when we want, we can.
This gives a good sound so true, except that the artificial harmonics (not natural) are compar diffiles out my Kay, and bent to maintain a high rev up and if we want the number of seconds to vibrate in the air it&#39;s hard for small fingers to force background (it is full of horn) is just a shame on my ca Kay came more easily. Kay and my guitar is a trs zero everywhere, from the sound that no parasites would be more than fine for a guitar bought in a pack of nunul beginners.

Bah nimporte with electric guitar which is played every few prs I think frankly, and ui is happening with all but given the heat of the sound, its roundness, in fact use blues, jazz seems more hardrock see welcome. The against-time reggae pass pretty well too. I play mostly hard rock and blues it&#39;s perfect. I just receive it so I perois not yet I think. I plugged into a rotten MG20 amp brand unknown, the sustain and the fat that is similar to Gibson, is Submitted ^ ^.
And I plugged into my marshall MG100DFX and with the distortion and gain with a 3 / 4 and the microphone easel, ca bitch purely ACDC. The neck pickup found hendrix style of velvety, without a sound well strato sr. In short, the only problem is to maintain its bent it high into the air and they have a hard sound, feasible but y&#39;all really need to compare my Kay or just a small effort is enough of a finger , l really need to flatten his finger like a crepe and force out the background sound we want to maintain full view for several seconds to vibrate in the air. Otherwise you inquitez not for other full / bent, works without a problem. I wonder if it&#39;s not something typical of Les Paul, I try a copy dja craft, I had the same problem.
If not I&#39;m clean but not pain trs enjoyable and the people around you apprcieront rather than leave that awful slap some ringing guitars, the c is really nice and "clean".

For the head shark, it is sy not worry, the worse the two horns to the headphone reminds ca dangus young devil horns and the Gibson SG was then seen as you can exceed your phobias and psychological say that "has thrown". Frankly agne not too. I use it for one day. (This morning).
I like everything except the problem of bent I explained twice.
No I have not tried other, a salesman told me that j&#39;tais suicidal. It&#39;s true that we must dare. ^ ^ And it&#39;s much better to try, we can be of so that everyone spoke well of such an object or guitar here.
The report seems qualitprix trs good. Channel bne, I do not believe it yet. At that price it&#39;s the nuts.
I lack of experience to see if I would do this choice.

I advise anyone looking for a gibson sg his old style or lespaul to acdc and led zeppelin is not bad. It conne not quite like a Gibson Les Paul but it&#39;s close trs, fat sound. It is true that a distortion can be saturated marhsall OTeN a good style acdc / led zeppelin.
Personal apart from the stuff that jexplique bent and artificial harmonics a bit hard to go out, find the sound bah fat and sustain, and it sounds a long time and it prcis, bah it&#39;s still a good trs guitar is too much class to be standing (on a good strap sr). Really, it sounds. I do not know if there is better because I did not test a lot of guitars in my life in the same price range. But for 517euros ports including c trs good copy of a gibson. ct and Epiphone pickups with their generally awful sounding "tic tic" is too too bad. The matrial you have trs trs good for so afraid expensive, so those who love ACDC, LED ZEPPELIN and his gibson and that not using a true, Do not hesitate it is really fun even with its default (which is personal to me). Each vision eh. A good value trs qualitprix I think.
And artisans will be the only well above comfort, alala, the lucky ^ ^.
See the source
Did you find this review helpful?yesno
Cookies help us improve performance, enhance user experience and deliver our services. By using our services, you agree to our use of cookies. Find out more.