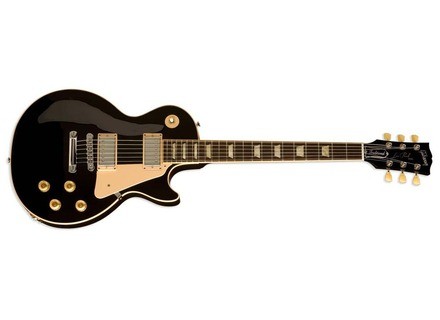 View other reviews for this product:
For the character, I would impasse, see Gibson on the site or reviews below.
Single precision, the body is not "hollowed out" as well as the standart 2008, but there are some holes dug near the knobs to "lighten" the guitar.
Overall this is a bit what is expected of a Les Paul, nothing too innovative in all its.
I&#39;d still + 1 for micro (the classics 57), reissue PAF, is as convincing as the originals? I can not say I have not had to try them secondhand. And the - I would say the mechanical immediately known that his will not be the Agreement and confirms thereafter.
You can also highlight the hoops by setting PLEK (mechanical process, which automatically sets the veneer frets over a handle), it is supposed to bring perfect intonation of the instrument over the long term, provided that the wood is stable.

At the grip, its was a little confusing to me, the handle is Type 50&#39;s, so big enough, or even a log, not obvious at first, but we made it. Amateur Ibanez handle, go your way! That said the frets are filed, the action of the guitar is good, neither too high nor too low.
The ergonomics of a Les Paul is known, its still a bit heavy in spite of "relief", but its not lean to one side or another. The access to the treble is not impossible, but not as obvious as a flying V.
Knobs, that is what volume or tone are very progressive, by moving it from 10 to 0, with all the differences, which gives very valuable nuances of sound that leans slightly to above.

For sound, we can not say that it is versatile, this guitar SA personality, but also versatility.
I plugged into two amps, a Boogie Transatlantic for a little more vintage sounds and a Triple recto to sound a little more edgy.
With a clear, she is doing very well, the sound is round, well balanced, with highs just slamming and low mids and bass a bit forward. It is confirmed when one passes a microphone to another. The output level is relatively high cruncher can quickly make sound clear.
Into overdrive this is where the beautiful (or as stupid as you want) wakes up. The 57 full rack teeth bites, growls while his full, no sound nasal or runny, the sound is well defined. Side handle is velvety, warm, round, tapping one has the impression that the sound of running itself. The sustain is confirmed as and as the gain increases. Depending on the amp to one side a little bit vintage but modern at the same time, say that a little grain of vintage, and the power of a more modern sound.
Going further into distortion, it pushes the doors of hard rock, it falls two feet in guns, black sabbath ... The sound keeps his grain overdrive, and remains well defined even with a high gain, natural harmonics out very easily, palm mutes are detonating. Brief happiness!
On a more metalheads, mediums are too far to stick to the Trivium and Machine Head, but his stick perfectly to the first albums Hoursemen Fours.
The guitar is very responsive to what the right hand is a good thing, its dynamics, as well as the amp (when you crush it under a ton of compression) allows a total expression. The middle postion is interesting, especially when you turn down the volume and tone of either micro, with a little overdrive it gets its punchy and not gaudy.
Compared to other Les Paul I could try this, in the most balanced sound I heard, others were too dull, too fat, too empty (as if there had a hole in the guitar), too dry (like mahogany was replaced by lime was compressed) ... Apart from a secondhand (a reissue of 59 dating back to 1995) I have not heard that made me much pleasure, its still a matter of taste.
My style varies quite, I play blues, rock, hard rock, and Rage against the machine, in all cases, even with an amp, adjusting the gain and play with the knobs of the guitar , I can cover all. It is magical.

Its going to be three years since I played with since I&#39;m hand, every time I say the same thing: it sounds terrible, I too vein to be stumbled upon.
Because at this topic, I have tried at the same time the standart 2008. Four in total, three different stores, and all on the same amp. Neither sounded like a had no sustain (my PRS SE at the time had more), another had no presence in the bass and lower midrange, ... in a store, I try two (too different from each other). The seller told me himself that none sounded like, Gibson can not guarantee a constant quality, so for shopping on the net is a little haphazard, so advise n &#39; bought a Gibson if you try and no matter if you prefer a different color!
What I hate about this guitar is holding agreement, the mechanisms are rotten, for this price I am disappointed, Fender did much better on models twice cheaper. The lack of Straplock again for that price, I think it is a minimum. The varnish cracks after three years already on the edge of the binding, I knew she grow old but not as fast. Poor welding on the bridge pickup which occasionnais a false contact, I repeat myself but for the price we did not expect this kind of failure.
But most are small microphones (I thought may be changed) rééllements enormous, and especially especially a touch of madness. The box, simple but elegant. And especially the quality of the violin, the grain of the wood that we see beneath the veneer back end, the quality of rosewood, as well as the table.
In short, many positive things about this guitar which gives it a very special and its so nice to me. The negatives relate only to "access" the grattte, but at this rate I think Gibson could make an effort.
A remake this choice I would do without hesitation that no other scratches since I esszyer pleases me as much as this one, other skyscrapers are good, even very good (maybe better), but this is sound I was looking for and I love today.
I think when you buy a Gibson Les Paul, you can buy a good scratching, but also pays part of the name. A 200-300 euros less than the Les Paul would have been more consistent, but when you fall in love ...
See the source
Did you find this review helpful?yesno
Cookies help us improve performance, enhance user experience and deliver our services. By using our services, you agree to our use of cookies. Find out more.