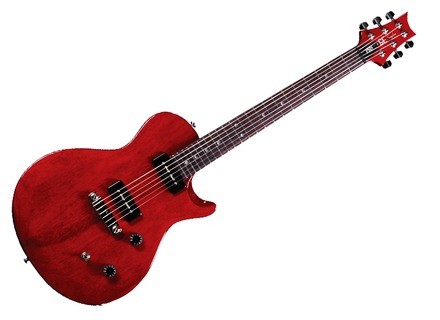 SE Soapbar, LP-Shaped Guitar from PRS in the SE series.

View other reviews for this product:
The SE line from PRS is one of the best line of import guitars. PRS is well known for their super high end Custom level guitars. Now they are getting more into the reasonably priced guitar market with the SE line of guitar. These guitars are quite similar to their USA made cousins but since they are made overseas so they are much less expensive. This is the singlecut model with their P90 soapbar pickups. It is mahogany with a maple top. It has the traditional 25 inch PRS scale length on a 22 fret mahogany neck with a rosewood fretboard. It has PRS's wide fat neck and two PRS P90 style pickups. There is a master tone and master volume with a 3 way toggle switch that is unusually placed. The bridge is PRS's wrap around stop tail design which is better than most wraparound designs.

These guitar have a lot of the playability you would find on a 3000 dollar PRS. They have great factory setups for being made overseas. This model has the PRS Wide-Fat neck which is now called the Pattern Regular neck. I guess Wide-Fat was scaring too many people off. It is a bit like a Gibson but with a much flatter radius so the the fretboard has more of a modern feel to it. PRS guitars always seem to have better intonation than other guitars even with their seemingly simple bridge setups. On many guitars with bridges like this the intonation is bad but PRS has figured out how to design their bridges to where the design is simple but the intonation is correct. The pickup selector is still off by itself. I dont know what the thinking is about this but I am not a fan.

The PRS soapbar P90s give you that classic crunchy P90 sound. It is like the perfect mix of a humbucker and stratty single coil. They are true single coils but they have more beef and body to them. They can clean up and give the twang but you can also get really dirty with them and they dont sound harsh. The nice low end the pickups deliver give you a nice thick tone overall. You can really rock out on the bridge pickup. This guitar is very versatile with these pickups. You can go from country to rock and jazz with some tweaking on the tone control.

This guitar is a great alternative to getting an Epiphone or something with P90s. Now many guitars come with P90s nowadays and if they do they are usually vintage reissues that cost and arm and a leg. Even if you arent really looking for a P90 guitar its something you should consider. Not many people rock the P90s any more and its a sound that is still very usable. If you are looking for a good guitar with or without P90s you should consider the PRS SE. It is a good guitar overall with a currently neglected pickup selection.
Did you find this review helpful?yesno
Cookies help us improve performance, enhance user experience and deliver our services. By using our services, you agree to our use of cookies. Find out more.