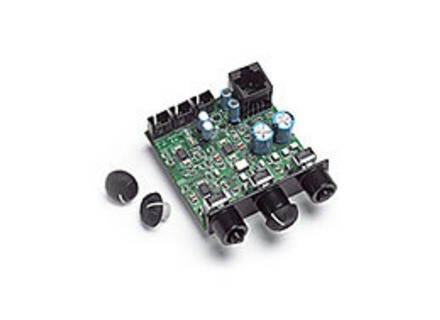 View other reviews for this product:
It's a system I have on a Taylor 414ce

First let me say that before I was a fan of the piezo Fishman Aura +. I even almost bought a Taylor without electronics to raise a fishman ...

Recall that the ES (not to confuse the ES-T) is a system based on magnetic pickups under the key (the ropes) and at the soundboard (two sensors).

I find people very hard. The sound is very natural (especially compared to the 114ce and 214ce piezo) and I did not notice any noise even at high volume (or the store or at home .. I use a tech SR JAM 150).

I think people who have problems of noise, have problems with ground loops. People in Taylor made a lot of videos on the subject.

Basically, a magnetic pickup is sensitive to radio emissions (eg the 50Hz) ... Who has not picked up the radio with a Fender unshielded (all models "roots" genre classic, vintage 52 tele ...)? And yet it does not shock anyone that strato is a real antenna noise!

Obviously they were not in Taylor coated the entire interior of the guitar with metallic paper known as an electric guitar ... So if you play this guitar Live, you need a hum eliminator, a direct box or a noise gate and pay attention to the cables ... As an often electric.

It's not a scandal, and it was even more predictable!

The advantage is a rather hot and warm no "piezo quack".

I remember one such as piezo mounted on the 114ce and 214ce does make the sound of the strings and that's it ... As usual, all the guitars sound a little similar with the piezos ... (NB: I've heard systems fishman very damn about Martin ... so it's not a general rather than absolute)

With the magnetic pickups you often have a round + the + sweet + jazz but then with a certain color (like Seymour Duncan or LR Baggs magnetic) ... If it was crap, people will not buy these microphones.

I admit that I was hesitant in buying the guitar because it is not, a priori, the sound I'm looking for a sound (I like my Aura + piezo). In addition we see videos on the net (Youtube Nstuffmusic) or the comparison with external microphone jack and direct is really scary ... You sound like an electric guitar Jazz

I am expecting the worst

... The result: the SR Tech JAM sound is very natural and not at all "electric". So for me an excellent sensor (not expect either to a studio microphone jack) but for a game in normal amplified it's really good! 100x better than the ES-T without Aura pedal ... When the noise, there are less than a cheap piezo preamp.

I think these are problems amp and ground noise that upset people (What I can understand).

Review of Race: check the quality of your electrical installation and test the scratches on the amp you have at home before you buy.

Yeah there are only three knobs but since it already sounds great with everything at noon ...

I was very pleasantly surprised.

Yet I love the combination piezo + Aura!

NB: In yamaha they developed a similar system but with piezos (ART) and then eventually they opted for a type AURA (SRT) ... As it sounds good ...

I think if one is pro and we play in lots of different places with different sound systems, the safest is probably the Aura. But this is far from being the case for everyone.
See the source
Did you find this review helpful?yesno
Cookies help us improve performance, enhance user experience and deliver our services. By using our services, you agree to our use of cookies. Find out more.