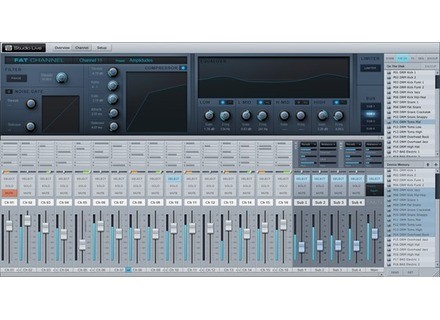 Virtual StudioLive, Other Music Software from PreSonus in the StudioLive series.

StudioLive mixer owners can now control the most-used StudioLive parameters directly from a computer, thanks to PreSonus’ new Virtual StudioLive (VSL) software for the StudioLive 16.4.2 and StudioLive 24.4.2 digital mixers.

VSL provides bidirectional control of channel, subgroup, and main-bus levels; Fat Channel parameters; aux mixes; effects; and the graphic EQ. You get a visual overview of your StudioLive settings so you can see, tweak, and organize them and can manage your presets and Scenes.

Controlling your StudioLive with VSL is a drag-and-drop system. Drag different Fat Channel presets into each channel in seconds—or just drag part of a preset to the appropriate processor within the Fat Channel. Assign channels to multiple buses and control mute and solo on every channel with a sweep of the mouse. Load effects; adjust the Fat Channel’s gate, compressor, and EQ; and adjust the graphic EQ quickly and easily from your computer. You can even load an entire mixer Scene by dragging it from a list that you see at all times.

You can store and organize a library of presets on your computer, reorder them to best fit your workflow for the gig, then transfer them to your mixer whenever you need them. Create presets anywhere you can take a computer, then drag them to your preset pool next time you connect the computer to the StudioLive. You can even drag presets out of the browser and email, IM, or disk-swap them with other StudioLive owners.

Since the control is bidirectional, fader moves and parameter changes made on the StudioLive are reflected in VSL, as well. So, for example, you can set up the StudioLive the way you want it and then save your Scene or other presets in VSL.

Virtual StudioLive is a 64-bit application. Unlike previous efforts at computer-controlling a digital mixer, VSL has an UI that can selectively drag preset components from sharable XML presets, so you can even drag an EQ into Skype so your friend can drop it on their StudioLive mixer. You can access controls buried deep into the front panel and see all controls at once with 1 to 2 ms of screen latency over a very high speed FireWire link—not a MIDI link requiring routing, setup configuration, and so on, as with some products.

Finally, if you connect a computer to the StudioLive via FireWire and set the computer up as a WiFi base, it’s possible to control VSL (and therefore the StudioLive) from a WiFi-enabled tablet PC, using VNC or RDC (Remote Desktop Control). That allows you to tweak and mix from anywhere in the venue where you can maintain a WiFi link.

Availability
The software will be available for Mac OS X and Windows by the end of the first quarter of 2010 and will be a free download.

For more information about VSL, visit the PreSonus Web site.