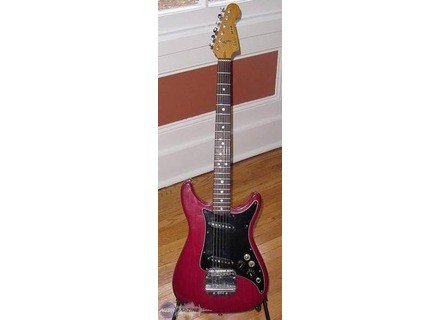 View other reviews for this product:
My Lead II stratabound body rather, a big U-shaped handle 21 boxes, two singles (a three position selector knob one more phase), the duo Volume / Tone and a plastic cover, fixed bridge, we do not the fuss. On my model, the varnish of the time (a temporary choice Fender clearly) is brutally ruined: multiple flashes are the body-to-date, it's a style.

The Lead II is more oriented logger: body too heavy and solid handle. Note, for the handle is a matter of style and taste, for the body, it's a shame. For somersaults, it will take up a draft of girl, which would be a shame given the nature of the beast, I personally opted for the 9 / 46 that allows at least to have some low sharp. If I wanted to keep my delicate hands (and my other guitar was precisely one of these guitars Adonis), I force willing to 10/52, with a Dropped D (below, the bass is really messy, go, say Eb tuning with Dropped C # but it really is because you insist).

As for settings, they are reasonably simple and versatile, as seen below. Right there. A little patience.

The Lead II has two basic sounds: the micro serious Reeuarh and treble that fart. It's a bit simplistic, says like that, but it's not true. For heavy rock, it fulfills its role, I prefer to use it with a Fender cruncheux and pedal his store, the more amps marshalloïdes reinforce the side draft. Beware of flashy high-pitched in this configuration, therefore, must find its footing. Clearly, one can obtain a rather difficult one but it is far from the beautiful Tele.

The phase-out position is too typical for general use, at least for my taste.

To simplify, let's say that the Lead is siturait between Les Paul and Tele, far behind the specialty of each of these archetypes. To simplify, then.

In short, with a basic setup rather roots, a guitar very well but do not ask what they can not do.

Keeping in mind all the limitations of the guitar, the Lead has the advantage to remain affordable. When it is found. An honest instrument, so if you're the kind of limited, like me, a little down the front but not too much, keep an open mind (attention, however, air currents).

Hence the overall score, which reflects more the next favorite one objective opinion.
See the source
Did you find this review helpful?yesno
Cookies help us improve performance, enhance user experience and deliver our services. By using our services, you agree to our use of cookies. Find out more.