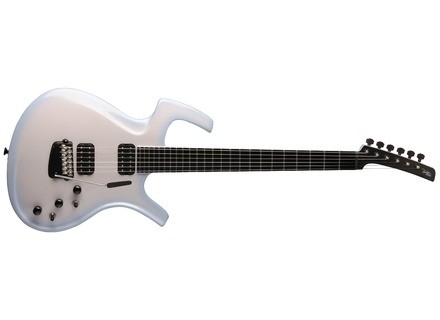 View other reviews for this product:
From the United States, this guitar has been developed for the widest versatility
24 frets, neck-through, the guitar is made of a single piece of wood covered with polyurethane resin. The key is carbon, touch is very nice. In addition, the cargo's fine and perfectly polished.

The pickups are custom Wound Di Marzio, developed especially for this guitar. It is also equipped with piezo pickups in the bridge saddles, which can be used in electro acoustics.

The bridge is of type float, but not licensed floyd rose. It was designed is made especially for this guitar. ¨ The fontionnement is against the same type as the floyd rose, without the problems of adjustment and editing of the strings.

There is an overall volume. Volume for microphones with a magnetic key. A double button controls the volume and tone of piezos, AUI are connected to a Fishman preamp. Witch two are available, one for changing the magnetic pickups, with three positions (doucle sleeve, split two singles, double bridge). Another 3-position switch allows the guitar to all-electric mode, electrical and electro-acoustic or electro acoustic only mixed

A control knob allows the spring tension of the bridge plate. The output jack is stereo, but you can put a single cable. we can then mix electro acoustic and Electric. In the case of stereo, sortiée goes to two amps, one for power and one for the electro acoustic.

The finish is amazing, it's guitar luthier almost ... She is beautiful. You have to love the modern forms

On paper, it sounds promising! !

The neck is thin and normally off? With a setting of rope rather low, we can do all the madness. And everything can go at an impressive rate.

The guitar is super light, just over 2 kg .... magnufique issue and general ergonomics of the forms, I have not found better on the market. At first it's a bit confusing, but later we can not do without. example, jonstion the handle to the body is so perfect in design, there is no difference between the top first down the shaft in terms of access ..... Great

Access to commands is not too bad, but the multiplication of those settings sometimes makes it dangerous in the heat of the concert. The new version 2004 to a reduced number of orders, which should be easier. I put 8 for this!

To get the sound that seeks not its ca faot not too difficult, not against, the settings are so thin, many progressive and that we can get a range of his incredible, everything is possible! !
On this side it's the peanuts.

I often change sounds to find new stuff, everything goes and it's wonderful all these possibilities. It gets its clear to fall, Christaller, despite two double (in splitted ...), with the electro acoustics. For crunch sounds, it's great ... and saturated ... Magical. one wonders how this guitar so fine, so little light to have as much sustain.

Attention must often change the strings, the guitar is so faithful that when it degrades the sound follows quickly. I advise the Elixir, which have a longer life.

I for 1 year. It is said that the instument is not a musician ... Ha well, the guy who said that was to play on the big big shit .... No, just kidding, it's true, but I can assure you that my level has exploded since I have I spend on stuff I could not imagine before, but not play more (instead) and without have to change my working methods. The comfort, sound, and the handle eronomie generally like what it plays! ! !

What I like most is its versatility, the sound in general, hestétique while actually ....
I do not like, its original price (more than 4000 euro), the difficulty of finding OCCAZ in a good condition for a good price, the battery preamp Fisman who eats fast enough but if we let the jack plugged in, attention to distracted)

I'll buy a second, the 2004 version in a color different from mine. I like it so much, I will collect them. I have a Gibson Nightawk I like also, unfortunately, she did steal the show by far ....
See the source
Did you find this review helpful?yesno
Cookies help us improve performance, enhance user experience and deliver our services. By using our services, you agree to our use of cookies. Find out more.