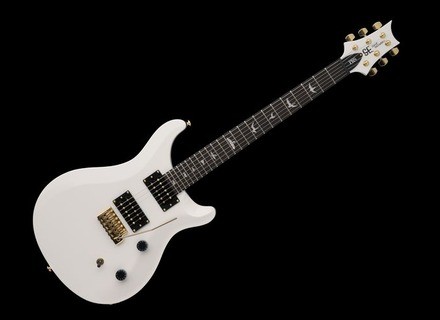 SE Dave Navarro, Other Shape Guitar from PRS in the SE Signature series.

The SE line will add an SE Dave Navarro signature guitar and update the SE Orianthi and SE Nick Catanese models. PRS's Maryland-made Chris Henderson artist model is getting a classic makeover. The PRS Private Stock department will offer a Neal Schon Limited Run of 60 guitars (the model will be available for order from January 19 – February 15, 2012. And in the acoustic product family, a Private Stock Cody Kilby model will be added to the lineup.

The Jane's Addiction guitarist's SE model will feature a beveled maple top, mahogany back, maple neck with rosewood fingerboard, and SE HFS and SE Vintage Bass pickups with a push-pull tone control and 3-way toggle. His SE model will also have his signature Jet White finish and gold hardware.

Also in the SE family, the SE Orianthi and SE Nick Catanese have new specs for 2012. The 2012 SE Orianthi will receive the new beveled SE carve and push/pull tone control with 3-way blade switch (previously a 3-way toggle with no coil tapping).

Nick Catanese of Black Label Society has been working with PRS to renovate his signature SE as well. The 2012 model will have a "straightforward" look with a mahogany body with a flame maple veneer, ebony fingerboard with no inlays, and a Scarlet Red finish with black binding. The SE Nick Catanese will keep its chrome EMG 81/85 pickups and Tone Pros adjustable stoptail.

Chris Henderson of 3 Doors Down has also revamped his Maryland-made signature model, shedding the middle pickup for a classic electronics configuration. The 2012 Chris Henderson will feature a PRS 250 treble pickup and #7 bass pickup with a volume and tone control for each and 3-way toggle on the upper bout. Other features include a maple top, mahogany back, mahogany neck, rosewood fingerboard, and adjustable stoptail.

The PRS Private Stock department is offering a Neal Schon Limited Edition guitar. This Private Stock guitar is a medium-thin archtop with a Floyd Rose system, curly maple top, back, and sides, and various of Neal's personal design requests, including knob placement and pickups. These instruments will be available for order from January 19 – February 15, 2012, but will be limited to a maximum of 60 guitars.