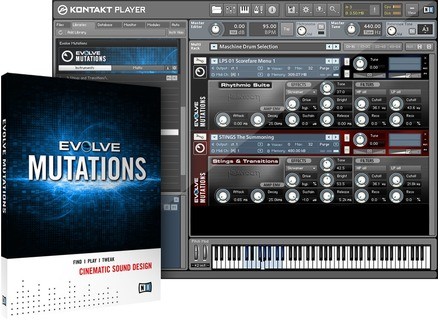 View other reviews for this product:
Evolve Mutations is software instrument that runs inside of Kontakt (or Kontakt Free) from Native Instruments. All the sounds were sampled by the Heavyocity team and then used dumped into several Kontakt .nkx instruments. Mutations is the software 'younger brother' of the original Heavyocity Evolve library. Mutations contains brand new sounds from the original Evolve library, but it much smaller in comparison. Since the release of Mutations, Heavyocity and Ni have released Mutations 2 with even more unique sounds. Both of the Mutations libraries are relatively small in comparison to other cinematic libraries, but are great complements to the larger libraries nonetheless.
The software is installed directly downloading it from the Heavyocity website or the NI website. Authorization is completed using the NI Service Center.

This library is really easy to use, however it lacks a few key features that Heavyocity has added to their other libraries (Mutations 2, Damage, Evolve update) like trigger effects. I've found that I don't use the trigger effects a lot, but they can some great special effects in specific situations.
I suggest experimenting with layering different instruments by opening multiple instances of the software in Kontakt. The drum loops are perfect for layering, but the melodic instruments can sound really cool by layering one instrument with a sharp attack with a different instrument with a long sustain.
This software is like 'instant car-chase' music. However, the typical criticism or downside of the software is that the CSI/Bourne Identity/cinematic sound can sound a little cliche. This software definitely captures the cinematic sound, but there is a fine line between sounding just like everybody else.

If you are looking to add some cinematic flavor to your music, Evolve Mutations is a great (inexpensive) way to achieve some decent results. The library is really easy to use. There are tons of great loops that are triggered by simply pressing a key on your keyboard. The one shot drum hits are great for adding some extra impact to your tracks.
I really like the melodic instruments in Evolve Mutations. I thought these were much more usable than the original Evolve library. There are some great quasi-electric guitar sounds included where a sampled strat is turned into pad. The mod wheel can be used on many of the instruments to mix a rhythmic 'sample-and-hold' type effect in the background. This alone can add a lot of 'movement' to a boring pad, but can make a dense mix sound clutter if overdone.
Did you find this review helpful?yesno
Cookies help us improve performance, enhance user experience and deliver our services. By using our services, you agree to our use of cookies. Find out more.