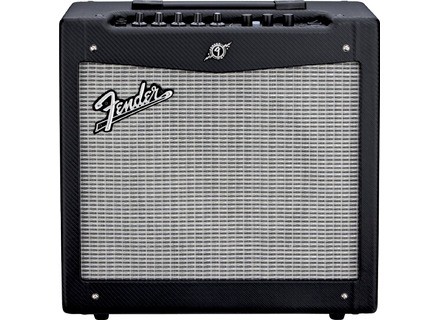 View other reviews for this product:
Just like all the other mustang versions from fender this is the amp modeling attempt from Fender. The sounds from this unit are mostly based off of Fender amps from the 60's but it does have a few modern sounds to it as well.

This is a one speaker combo rated at 40 watts. It may not sound like much but it does get pretty loud. You aren't going to find any tubes inside since it is a solid state machine. So the natural tube feel and tone are what is missing in this product.

I really don't like amp modeling but there have been a few exceptions to the rule for me. There are some presets on here that are quite enjoyable to play such as the British Steal and the Supersonic. You can get some good David Gilmore tones with the supersonic feature and get some mean 80's metal tones from the British Steal. You can probably guess at to which tone they got this preset from?

While the tones from this amp aren't going to put you in the recording studio, it does have some usable and fun sounds for bedroom playing. At new these units come in at around $200. Not a bad price for this, but honestly I dig the tone from the Roland amp modeling a little bit more. The cleans on this amp are outstanding and would be hard to beat. However, the dirty channels are a big disappointment for me.

I would recommend this amp to any beginner guitar player who needs an all in one amp for clean, dirty, and effects to go along with it.
Did you find this review helpful?yesno