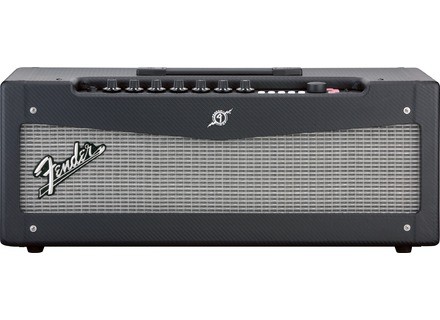 View other reviews for this product:
This is the head version of the modeling series Mustang amps that Fender is pushing lately. It has basically the same feature and tone as the combo but just in a head from. I am not really a fan the head amp because of the whole idea of amp modeling. I think they are not used for live play and should be used only for practicing at home. having a head and then having to get a cabinet is too much of a commitment.

I believe that the Mustang series is the flagship line for amp modelers that Fender is putting out. They now have several different sizes and wattage. These units are some of the best sounding modelers out on the market and definitely Fender's best efforts in this game.

I have never been a fan of amp modeling since I feel they don't sound authentic or feel at all like a real tube amp. This particular model doesn't change my mind but it does sound good for what it is.

A great feature with these amps is not only the ability to have amp modelers, but also the stompbox models as well. This gives you a real feel for tossing a overdrive pedal in front of a Fender style amps.These amps sound particularly good with Fender guitars. I like hearing this amp with a Fender Stratocaster or a Charvel. I like hearing the low to medium bodied woods with these particular amps.

Another great features in running your speaker simulated output direct into a recording device or house PA system. I think the amp sounds the best when in this situation. Running the direct out into the mixer sounds best in my opinion.

This amp is super loud. Coming in at 150 watts this little combo will knock you on your butt. This is also a more expensive unit for the amp modelers. At new these units come in at around $299. sort of on the high side for these types of amps.

I would recommend this amp for someone who needs a head to go with an existing cab. I would not buy this head first. Then you would be more likely to get the matching cab which is ridiculous as well.
Did you find this review helpful?yesno