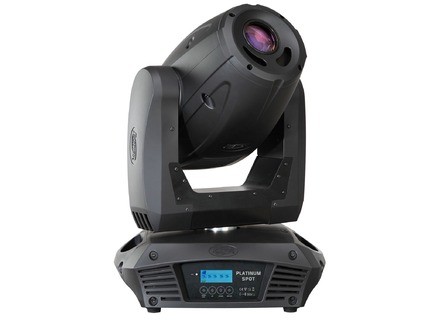 Elation Professional has announced the lineup of lighting fixtures it will exhibit at ProLight + Sound / Musikmesse trade fair in Frankfurt, Germany, March 24-27.

Here is a closer look at three fixtures, and what Elation had to say about each of them:

Platinum Spot 5R—"This DMX moving head produces an output comparable to a 575-watt fixture, yet is half the size, uses less than half the energy and weighs half as much as a typical 250-watt fixture. The secret is its advanced MSD Platinum 5R technology, a revolutionary lamp source from Philips, which rated at 2,000 hours, also burns twice as long as a conventional 575-watt fixture's lamp. Additionally, the Platinum Spot 5R moves faster than traditional moving heads on pan and tilt, as well as on color-gobo changes. It offers a full complement of professional design features, including: 8 dichroic colors; 22 gobos (8 rotating/indexing, 14 static); 3-Facet Rotating Prism effect; Variable Frost; Motorized Iris; Motorized Focus; Variable speed Shutter/Strobe; and 0-100% Mechanical Dimmer."

Design Spot LED—"An LED-powered version of Elation's popular Design Spot 250 Pro DMX moving head, the Design Spot LED weighs less than the original model while offering output equal to a 250-watt discharge lamp plus an extended 50,000-hour LED lamp life. It offers all the same features as the original, including a Variable Frost Filter, which allows it to function as a hybrid spot/wash effect, and a Motorized Iris and Motorized Focus. Nine dichroic colors, 14 gobos (7 rotating/indexing, 7 static) and a 3-facet Rotating/Indexing Prism are also included."

These and other lighting and control products can be viewed at Elation's PLS exhibit, which will be located in Hall 11, Booth D51.

Check out www.elationlighting.com for more info.