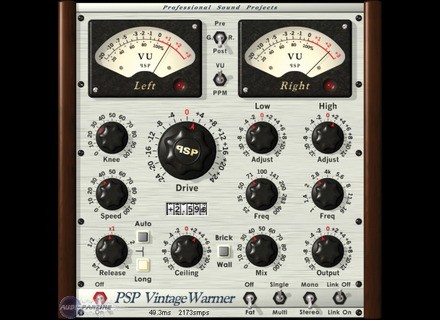 View other reviews for this product:
One thing I can say about PSP plugins is that they are stable, light, and quick to install. I've never had a single issue and I've been using them for years. Well, I used 1 forever and finally got 2 because I liked the original so much. The manual is great and informative, although I must say after all these years of using Vintage Warmer I'm still not entirely sure what it is exactly. I'm fairly sure it's a tube compressor or preamp emulation. At this point I really don't care because I know what it does, and I like what it does. The manual isn't totally required because if you've used anything like this before you won't have trouble figuring out the controls.

I originally used Vintage Warmer as a mastering plugin. It just makes the mixes POP more to my ears. I use it with Cubase and Pro Tools sometimes. I later found that if I used it on tracks that sounded muffled or bland it would magically liven them up and bring them into the mix with a lot more grace. It really became my "last resort" plugin before I forced myself to do a retake of a bad track. Just when I think a track is beyond saving, I put vintage warmer on it and I swear more times than not it's suddenly usable. Not only usable but actually really great. Usually there's not even much tweaking involved. I can actually run a bus with VW in it and run whatever bad tracks I have through that bus. It does the same magic to all of them.

When I got Vintage Warmer 2 I was a little upset at first. I felt like I couldn't get the same sound out of it that I got with 1 and I didn't like that. However once I figured out the new controls it won me over. I now like it even more.

I think Vintage Warmer might be my favorite plugin. Okay, that's a stretch. But in terms of most used plugins, it's probably in the top 3. There's always one or two tracks on every song I do that want to be difficult. PSP VW fixes them right up most of the time. A warning though, too much of this plugin can really kill a mix big time if you aren't careful. Especially if it's in your master bus. It's a supplemental plugin. Not made for extreme use.
Did you find this review helpful?yesno