Altered modes, the specific case of the Bartok scale

In the previous article we started studying two particular cases among altered modes. Remember that altered modes are those built from a scale that is not major. The two cases in question are the altered scale and the Bartok scale. After having explored the first one in the previous installment, today we'll study the second one.

The characteristics of the Bartok scale

The "Bartok scale" is in fact the fourth mode from the melodic minor scale, or the Lydian b7 mode. It get its name from Hungarian composer Béla Bartók who popularized its use at the beginning of the 20th century. Due to the tritone formed between the major third and minor seventh, it is also known as the "Lydian dominant mode," in reference to the natural Mixolydian mode (see article 51). The latter is also characterized by the tritone between its major third and minor seventh, which is in turn linked to the dominant chord of the original scale in the tonal system.

As you've seen throughout this series, our Western ears are used to the famous tonal system and the resolution of tensions created, especially the tritone. Consequently, within the framework of the Bartok scale, the progression of the three last degrees of this mode seems to ask for a traditional resolution with the perfect cadence.

Hence, in the following example everybody expects an F after the last C. 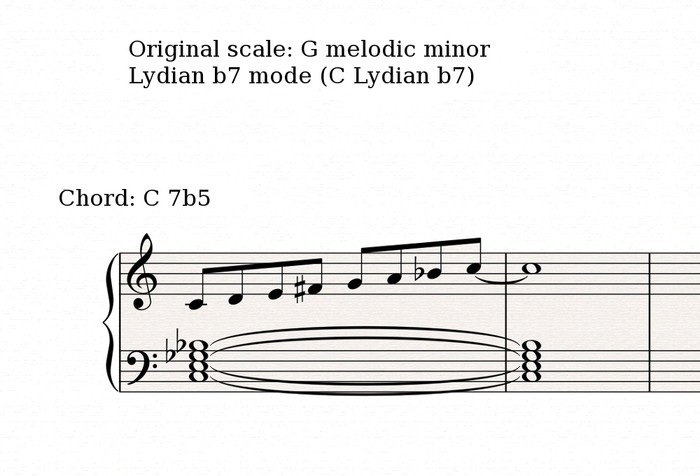 However, the comparison between the Lydian b7 mode and the natural Mixolydian mode stops right there. In fact, contrary to the latter, the Bartok scale is completely incapable of resolving the tension eventually created by the tritone. And there is a very simple reason for that: it doesn't include the resolution note! The resolution note is a non-chord tone of the mode. Thus, in the previous example, the F expected after getting to the top of the progression doesn't exist in this mode. Unlike what happens in the natural Mixolydian mode, which does include the resolution note and can easily create a perfect cadence.

The use of the Bartok scale

The Lydian b7 mode, according to the natural Mixolydian mode we mentioned above, is put to use particularly with chords that have a dominant 7 structure. The fifth of these chords can be perfect or diminished (7b5 chords), and the augmented fourth and perfect fifth of the Bartok scale allows you to cover both scenarios, as you can see and hear in the following examples:

By the way, in this example, as well as in the first example of this article, the chord is a b5 (G flat) and not a #11 (F#). So you could say that the context is tempered, which allows you to use the F# of C Lydian 7.

To finish, and to satisfy lovers of enriched harmonies, do note that this scale is also widely used with 13(#11) chords, as in the following example: 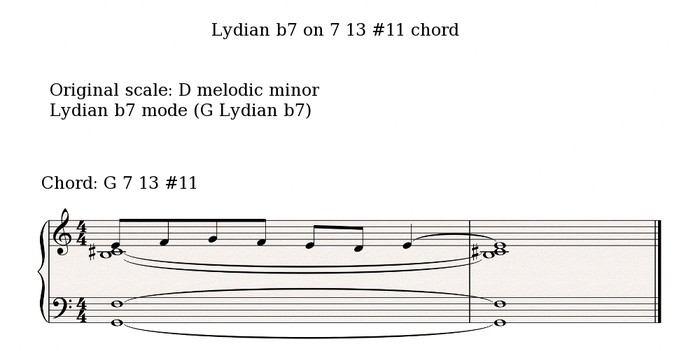