There's probably not one single article in the first 45 articles of this series, which dealt essentially with the tonal system, where I didn't mention cadences.

But ever since I introduced you to the modal system, I've always mentioned some cadences you should refrain from using to avoid being led back into the tonal system. The concept of cadence is often based on the idea of a tension that is resolved, in other words, the foundations of the tonal system! But that doesn't mean that there are no cadences in the modal system, quite the contrary!

Cadences in the modal system?

Indeed, there are, but you should know that modal cadences aren't of the same nature as tonal cadences, in the sense that they are not tensions that resolve. However, just like tonal cadences, their function is to emphasize the character of the mode where they are used. In a tonal context, you will usually see them being used to reaffirm a particular modal color, to mod-ulate! Because, to complement what you saw in articles 17 through 21 regarding modulation, I encourage you to go beyond tonal alternation and explore, even within a mainly tonal context, all the different colors modes have to offer! But let's not digress here...

The cadences we'll look into here have the common characteristic of entailing movements between the tonic chord of the mode and its different characteristic chords. Every such cadence can be repeated as many times as you need. In fact, these repetitions convey by themselves the modal character of the musical passage in question.

One last remark before we move on to today's topic. In article 48 you saw that, within a modal context, chords can express the context in question reproducing the modal fragment. In the cadences we are going to explore, the modal fragment is not necessarily used in the chords because no single chord will be responsible for conveying the character of the mode, but rather it will be the cadence itself that will reveal the character.

Enough preliminaries, let's get to the point!!

Cadences in the Ionian mode

Like in article 51, we will not go over again the way the main mode of the original scale works. If you wish to refresh your memory on that particular topic, please refer to article 7 of this series.

Cadences in the Dorian mode

There are three big cadences in the Dorian mode. The first one is the one that goes from the first degree minor to the second degree minor 7. 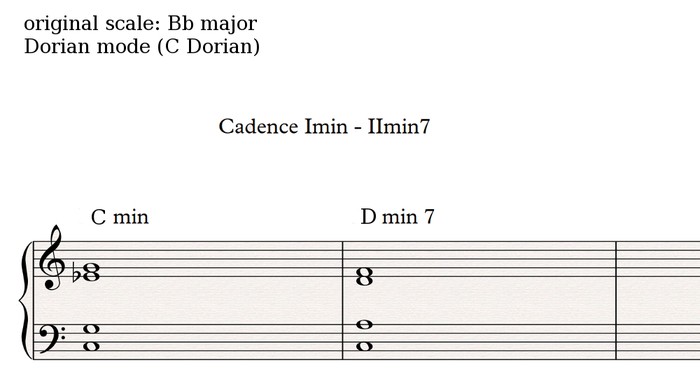 This cadence can be extended over four bars. When you listen to it, the statement mentioned above will be obvious: none of the chords is a tension that resolves in the following chord, which is something that applies to all the cadences we will study.

The second cadence goes from the first degree minor to the seventh degree major 7. 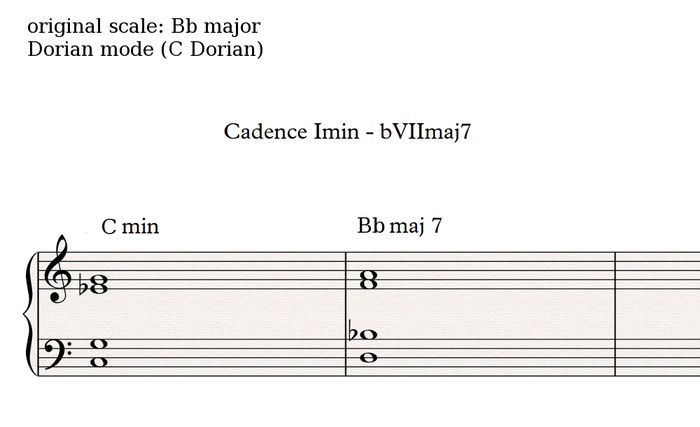 This cadence is called "pandiatonic," because all the notes of the mode form part of the chords that make up the cadence.

You can also insert a second degree minor chord between the Imin and the bVIImaj7. 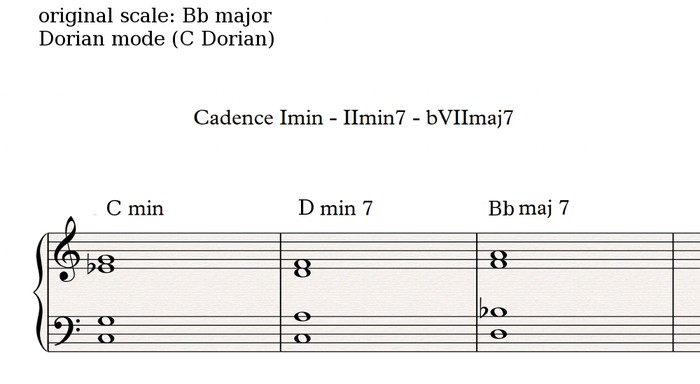 The last cadence is the one that goes from the first degree minor to the fourth degree "dominant" 7. "Dominant" is in quotation marks because the idea here is to emphasize more the structure (a major triad on top of a minor triad) than the function of the chord, which makes little sense within the modal framework. Also note that the presence of the Eb-A tritone doesn't generate as much tension as it would in a tonal context. 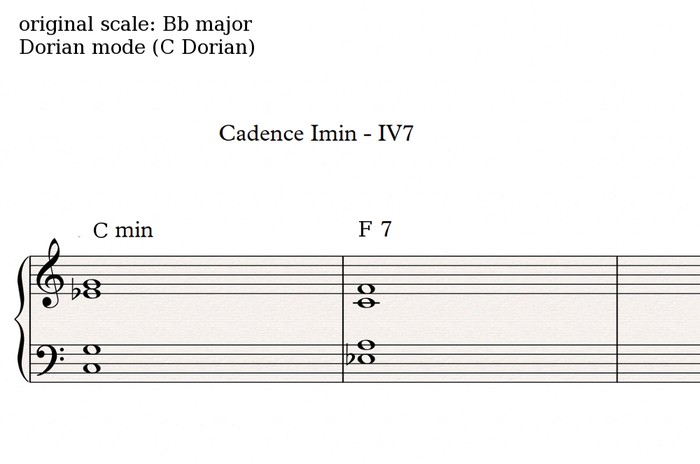