Pedal and ostinato in the modal system

In the last couple of articles we started to see how modes work, especially considering their harmonic characteristics and the cadences which support them.

In this article I invite you to follow this exploration with the study of two forms of writing very common in the modal system. As I've explained so many times before, the tonal system rests basically on the resolution of tensions, whereas the modal system is rooted on the idea of stability, or more exactly suspension. Taking these ideas of stability and suspension in consideration, I think it's pretty coherent to come back to something we mentioned in article 29 of this series, namely the pedal, to then move on to the ostinato.

The return of the pedal

As you saw before, the pedal basically consists in the presence of one or two notes throughout several continuous chords, note(s) which usually remain in the same octave, giving place to the inversion of one or several chords. This form of writing includes in itself the stability required by the modal system. But be careful, this doesn't mean that the pedal is only used within this frame of reference! As you saw in article 29, it is completely adequate within a tonal context, too. However, the repetition of one or several notes during a relatively long time fits perfectly well with the modal system, as you can see in the following C Dorian example:

The pedal is determined in this case by the C in the bass line which is repeated throughout all chords of the progression.

Ostinato is a musical from also based on repetition. It's not for nothing that ostinato in Italian means stubborn: it is basically a motif or phrase that's repeated as long as you like. You can usually use both pedal and ostinato at the same time. And you can also commonly see an ostinato developing on top of a pedal: 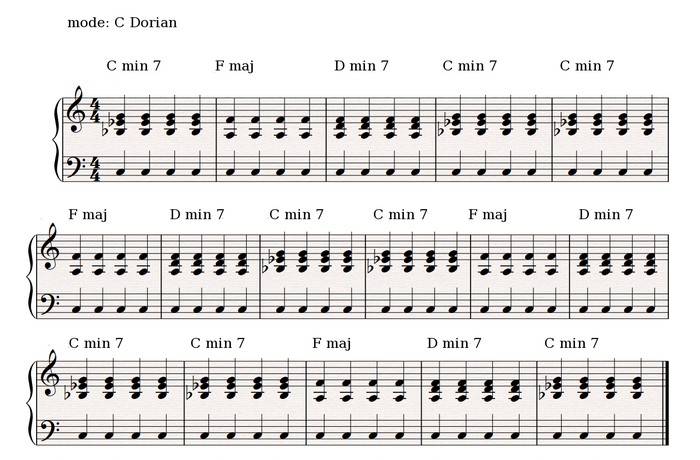 What better way to illustrate the notion of ostinato that to resort to some examples, even if they aren't strictly modal. When it comes to the melodic-harmonic ostinato, Ravel's Bolero is one of the best known examples, repeating the same phrase no less than 17 times. When it comes rhythmic ostinatos, African rhythms are particularly "telling" and they can even evolve into polyrhythms. Finally, in contemporary music, you could say that the audio loop is a good representative of the ostinato, too.