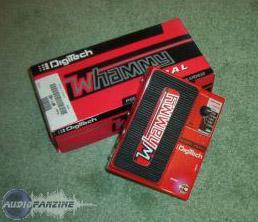 Octaver/Harmonizer/Whammy from DigiTech belonging to the Whammy series.

View other reviews for this product:
MGR/Ryan White

It's the most insane usefull/useless pedal I have ever owned. The reason I love it so much is because with the right setup you can almost emulate a Moog synthesizer. It goes up 2 octaves and down 2 octaves, many different harmonies available, it can be used as an octave pedal also with some tricks up it's sleeves.

After years of use it doesn't like to completely go up or down to the full octaves sometimes, it's very hard to get a slow rising motion because it rarely ever goes fully up or down anymore. It's sounds like more of a personal problem i guess. I will take it in sometime soon to get it looked at. It also makes some funky noises sometimes, but I like that.

Very very sturdy, I think it would survive a nuclear blast. The only problem is the gripping rubber adhesive has worn down and gotten slippery, nothing more adhesive can't fix.

If you ever get a chance, at least play with it, I guarantee you that you will buy it. I haven't played the reissue yet, but I'm sure it will give you as much satisfaction.