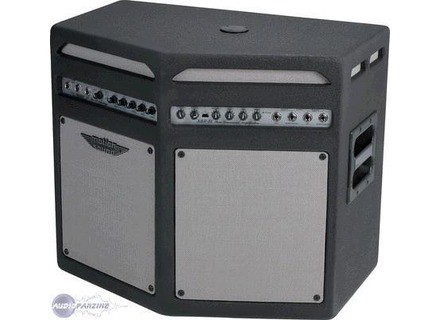 View other reviews for this product:
This is a keyboard amp, relatively compact, heavy. It is stro, so possde 2 speakers of 10 inches for low frquences and two 3.5-inch HF. They are in a certain angle disposs for "distributing" the sound of two cents too. Simple concept, but that works quite Manir thunder.

There are 2 inputs "expand" (Stereo) and 2 between classical (Stereo). Expand both the entries that have this little extra that is actually an effect that spatialized sound even further. A three-band EQ lets you change the sound, and always a musical Manir trs.

Otherwise, the ct left, there are two inputs (mono) for connecting an organ, or CLNE. The entrance is located before a prampli lamps and an EQ.

At the rear there yammer two XLR outputs symmtriques to signal gnrale a console. The ingnieurs will be even more happy ... no need for DI. There is also the possibility of rgler the level of two microphones situs of the tubes 2 cts of Leslie (the indoor).

For a more complete keyboard player, it's hard ...

One downside, the weight. Prs of 40 kg. But there are grips on the practical ct.

Trs simple to use. Finally keyboards that possdent Stereo samples (such as pianos) or other sounds with good stro effects are amplified as they should. Printing spatialization is really fabulous. An electric piano with an auto-pan going really well right from left.
An organ sound with a feeble internal simulation just take the entire dimension.

The rglages are clear, yammer values ​​proposed by the manufacturer that are surrounded around the knobs.

The only thing not practical for the rotor speed rgler suprieur his acclration must leave the speakers on your checks circuits ... The trim-pots on the reports 'collection outdoor would be more appropriate.

For the size, I must admit it's pretty impressive! Boti and one sound so vast and wide. I use a Clavia Nord Stage, the two main outputs of the channel deuxime stro, and I played the sounds of acoustic piano, tablecloths, clavinet, CP-70, Wurly, and so on. ..
The first channel Stereo (expand) is used for the Fender Rhodes (with Stereo prampli Intgr with trmolo), the sound is just incredible. It is also clear that if the basic sound of the instrument is good, it will also be better on this amp.
The organ is taken from an auxiliary output of the Nord Stage Compact, in mono and with the internal simulation dclenche. It really does .... The KBR-3D EHJV lacks a bit of the bottom of the spectrum. It is logical that two 10-inch chssis will not have the same frequencies and rponse in the same heat as roughly 15 inches. Just do not push too hard on the bottom. For the BMG is not IDAL, say it right now. And not the vocation Premire of this amp.

I would say that the average sound volume, it sounds great. Really. A large volume, the sound loses its flavor.

It is expensive ... trs Europen expensive for us. United States (the product below) is almost 40% cheaper. But for someone looking for a compact amp with good sound for playing in small clubs, it gnial. Or simply to have a good return on stro scne who transcribed the sound as it should be.

Why do guitarists, bassists have great instruments and amps height, while we keyboardists, we have instruments that are worth sometimes thousands of Euros, and is content to play back a mono scne its a rotten? A good amp, Stereo sound with great quality is always a pleasure to play.

I therefore recommend no hsitation.

But I put 8 / 10 prize to the views of trs lev. (Approx. 1700 Euros new)
See the source
Did you find this review helpful?yesno
Cookies help us improve performance, enhance user experience and deliver our services. By using our services, you agree to our use of cookies. Find out more.