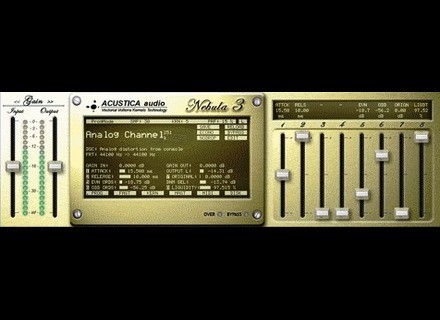 Nebula 3, Other effects bundle or multi-effect from Acustica Audio.

View other reviews for this product:
At the time I bought Nebula was a nebulous concept enough .... Since it appears that the site was redone, it looks a bit clearer, but it's not obvious how it works without trying the beast, for it is a plug-in rather special. No big installation problems.

Good software is very resource intensive, it seems that optimizations have been made over time, but it's still cumbersome to use, since the concept ... I did not experience significant bugs.

I use it for 2 years (already), I have the tape libraries and tape saturation boost home cdsoundmaster + (coin). Well, it sounds great, but because it eats a lot of resources, I use it less than I would have liked. I have not even tested the libraries of console for sale (home Alexb) who have good reputation, nor the EQ pay because at the workflow concept Nebula is not what is best. To fully exploit Nebula in a mix, it should load several instances by track and it seems difficult and rather headlock to implement.

Nebula is the kind of software that uses the set without too: load a library (1 EQ 2 API 12kz dB for example) and voila, you have sound hardware in your computer. You'd rather a dB at 10kHz? Bah you load another library, and so on. It's like a sampler of effects. But this is not the convolution technology is less static than the convolution and yeah, it sounds great.

In the end I think Nebula is to master his tracks or make a Neve EQ or DW Fearn on vocals for example. But given how the plug in I think that we can use it on all its tracks as the libraries would require the console for example.

The price goes up pretty quickly because there are several options in Nebula, and the optional libraries that you can buy more, me I am already close to 250 € for taking just version 3 pro Nebula bookstores + tap, I'll stop there, I understood the concept, it really is a plug that I use sparingly and at the final price / quality ratio I've seen better.

I have thought of EQ, compressors, preamps, tape, consoles, reverbs that sound good for not too expensive, but ultimately the libraries provided with free Nebula is correct without being exceptional and what is the good name of the plug in sound it is the commercial bookstores, and Nebula is a little world where every library editor scratches here and 20 euros for a EQ, then 40 euro for a SSL console and in the end it is used not so much to Because of greed and workflow plug in resources and RAM. on the other hand in sound is clear that this is what is best, with the best plugs from UAD, Waves, etc..

So I do not recommend this plug in unless you're comfortable at budget (starting from 200 to 300 euros to please you) and you might want to bring a touch of prestigious hardware here and there in your mixes, but if you want to put a Neve and API EQ on all tracks of your song, it's doable but it will bounce / freezer most of your tracks, large galley prospects. Basically there are many good quality plugs today and the alternatives are certainly more usable than Nebula.

If you are shielded from money, it is better to take a UAD I think if you have a tight budget, Nebula may be your style but think about it 2 times before you leap.
See the source
Did you find this review helpful?yesno
Cookies help us improve performance, enhance user experience and deliver our services. By using our services, you agree to our use of cookies. Find out more.