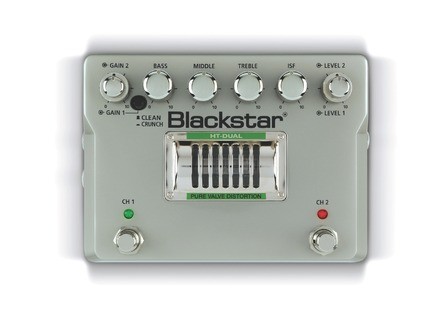 HT-Dual, Other guitar saturation effect from Blackstar Amplification in the HT Pedals series.

View other reviews for this product:
This is a distortion pedal that basically tries to emulate a tube amp. While there have been a few of these that I've tried, not many have really come close, so I was skeptical about this one. It is basically an analog effect. It has 1/4" input and output, as well as an "emulated output" which is good for DI as it basically is amp modeler. I don't particularly like using it but it is definitely an interesting addition to the pedal. It requires an external power supply which is 16V, which is a shame since you'll most likely have to buy a separate power supply.

This pedal has a lot of variety to it. It's got two channels on it which makes it a lot more versatile than the average distortion. The first channel has the option of being a clean boost or a light crunch, while the second channel is more of a heavy crunch. The controls feature a volume knob and gain knob (which both have separate controls for each channel). There's also a three band EQ as well as a knob labeled ISF, which operates like a presence control. The website advertised that it switches between the classic British sound and the classic US sound (basically, between Vox and Fender). I don't know if I buy that comparison but it definitely changes the sound up quite a bit. There's a switch for each channel as well as a switch that changes channel one from clean to crunch.

This pedal sounds pretty good. I definitely prefer the sound of the first channel as it goes from a lighter, cleaner boost to a relatively light crunch. It's basically a little harder than an overdrive but not as powerful as a distortion. The second channel is a lot more aggressive, and in my opinion, the weaker of the two. It definitely gives me a too-heavy vibe that I wasn't really looking for. I'm sure there's some people who would like it but it tends to be way too muddy for me. Either way though, there's definitely some good tone to be found in this pedal. It sounds great with actual tube amps as the first channel tends to bring out the warmth of the tubes quite a bit. The second channel kind of loses that sound though. It sounds equally good with a Les Paul or a Strat which are the main guitars I use it with.

This is a pretty good pedal overall. I'd say that the best thing about it is probably the first channel which gives you a nice distortion sound. Is it worth the price? Probably not, really. It doesn't really have that much more to offer me. It's certainly good but not worth 250 dollars new. I'm sure somebody would dig it, though, so I'd have to say it's worth checking out if you come across it.
Did you find this review helpful?yesno