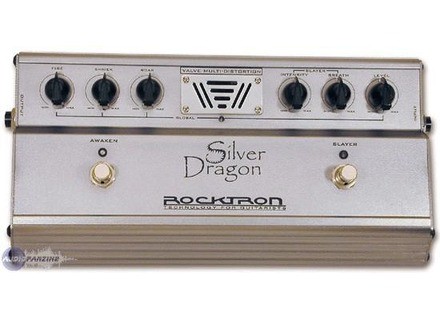 Silver Dragon Distortion, Other guitar saturation effect from Rocktron in the Boutique series.

View other reviews for this product:
This Rocktron pedals analog distortion is light and transistors 2 channels.
Entrance, exit, one branch, you can play, a sound RULES ...
As discussed below, the absence of the rglage mdiums Vitera you remove them. Pe know that people are mdiums trs important to resort guitar group!
I love a rglage per channel as the MXR Double Shot, but I'll pass because both channels are excellent!

Config trs simple, from left to right we have the knob of saturation of the lamp, bass, treble, saturation of transistors, a knob trs prcis adding some grain "amricain" which allows the sound artificial harmonics out more easily (Petrucci fans), then level out!

The manual is nothing left for what to match the switches because they have holy names! Anyway ... If the guys were pleased Rocktron is the principal!

So l. .. It's just beautiful!
I had an MXR before it silent trs trs clean and sharp. I will say with hindsight "too professional". Now, Rocktron has brought me the sound I wanted.

The first channel is a crunch but may be a distortion if the microphones mtal follow with enough gain e lev. The second channel transistor and lamp combines and provides grain amricain trs.
I put 10 as possible rglages are terrible! I play on a Kustom amps and it's perfect! The power of a head lamp is not, but its light is reflected quite well.

I'd put 10 in total because it's exactly the sound I was looking for. I wanted to try the Tubman and H & K V-Twin and Mesa, but they are expensive trs!!
Try! It's the only thing to say!
See the source
Did you find this review helpful?yesno
Cookies help us improve performance, enhance user experience and deliver our services. By using our services, you agree to our use of cookies. Find out more.