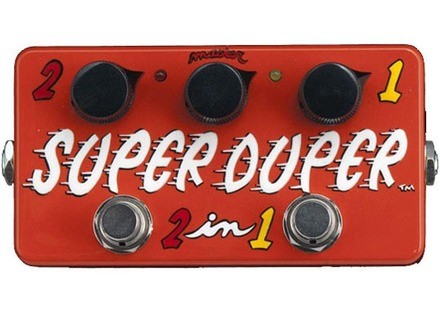 View other reviews for this product:
The Zvex Super Duper is a two in one booster and overdrive pedal for electric guitar. It's an analog pedal that has the basic make up of 1/4" connections for input and output and requires nine volt power from a battery. It's not rackable as it's a stomp box to be engaged by your foot while you're playing.

The make up of the Zvex Super Duper makes it really easy to use. The first and second channels have almost the same circuitry, but the second channel has a master volume knob in addition that gives it all the more gain. Each just has a gain knob as well as the master volume knob that is present in the second channel. It's possible to have each one on or off independently as well as use the two of them together. Each has it's own foot switch. The pedal shouldn't require a manual for use as it's really simple to get the hang of it.

The sound of the Zvex Super Duper can vary quite a bit, from giving you a really subtle drive boost to full on mayhem. It's possible to get some wild drive sounds out of this, but I really like it for subtle boosting for leads and such. The best part about it has to be it's versatility, as you can do a lot of things in it since it's really got two drives in one. Each of the two channels are somewhat unique, as the master volume knob adds a lot to the second channel. It's when the two of them are engaged together where you really can make some noise...

The Zvex Super Duper pedal is a really cool one for those who like versatile booster/overdrive pedals. It's super easy to use and it's not at all hard to get a wide collection of different sounds between the two channels. It's also got true bypass so no worries when it's not engaged or at lower volumes. The price isn't cheap but it's about right for a two channel pedal for this type. Probably a bit out of the price range for amateurs, but semi-professionals and professionals definitely need to check this one out.
Did you find this review helpful?yesno
Cookies help us improve performance, enhance user experience and deliver our services. By using our services, you agree to our use of cookies. Find out more.