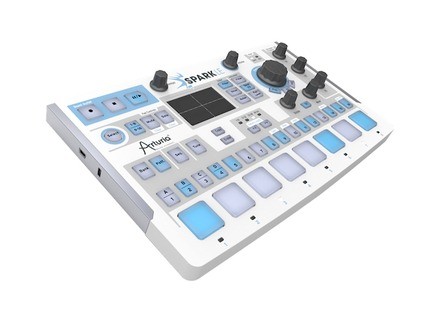 Buy this productView price information >
View other reviews for this product:
USB connection plug & play if the app is open,
some unusual concerns disconnections (just disconnect and reconnect the cable) but no impact on the sound if it is running.
effects of good use for the small touch pad (very live)
comes with a big fat bank drums sounds, software sampler. so you can edit your sounds in the pitch, attack, decay, you can add reverb compression ... etc. via the mixer enough well-designed app.
A good point, you can put multiple sounds on a same pad, allowing you in the manner, to the drum layering, to, have the different sounds according to your Velocity hit the pad and .... oula of random and lots of other stuff - ge-cool shot of me I put a lot of samples of low (6max) on the same pad, and I get a glitch-hop and dubstep style very quickly and very effectively Velocity automating the sequencer.

fastoche not need the manual (very little full anyway) in one day you have mastered the beast.

edition of the effects are clear and easy for that is already a bit of computer music.

sample level, there's everything with add ons can (spark dubstep, EDM spark for example), very well made (Arturia), but that as I already have a large library drumsamples, it will be just as interresting import sounds of our favorite banks and that we know well.

expression of Velocity on the pads is less precise than the NI maschine. but it's still more than enough for electro prods, and this one is rééditable the automation part of the sequencer (if you have a shit recording)

it must be less than I, what I love is its portability, simplicity, and efficiency. I tried maschine native instrument (also very good product), but may be it was a little too full for what I intended to do. And less portable. LE version of spark for me is far more interresting than its big sister, too big without being more effective.

Value obviously very good price. I hesitated with maschine mikro, which was more expensive, and I do not regret my choice.

Both wholesale and only flaws are:

- The absence of a small screen on the controller live ca can be annoying to have to open the window of the spark plug in order to change the sounds for example.

- And ... no time streching ... so no loops without pitch, can not change tempo live if you use ... it's a shame ... but there is much to be hoped qu'arturia make us a good update, which will void this remark.

so far I do it again this choice without hesitation. really.
See the source
Did you find this review helpful?yesno
Cookies help us improve performance, enhance user experience and deliver our services. By using our services, you agree to our use of cookies. Find out more.