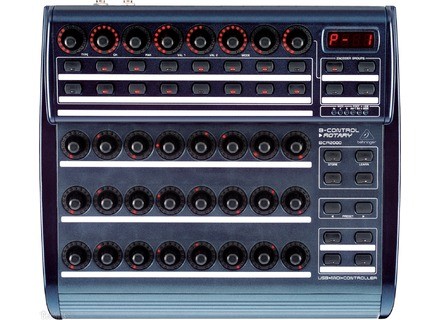 B-Control Rotary BCR2000, Other MIDI Control Surface from Behringer in the B-Control series.

View other reviews for this product:
Used for 4 months
Aprcie for various reasons
- Appearance
- What lies derrire appearance
- Its price in miTHOMMAN (it sucks but hey ...)
- Software patching
- The flexibility of CONTRL (li software)

Dception: twisting the wrist to move from 0127 if the materials used does not include the bcr MIDI mapping
I have earlier stages of testing my keyboard via midi control evolution, the bcr is much more srieux
That's what made me avoid a uc33

The BCR seems to be perfect computer music: a lot of software allow the midi learn
I found a certain harmony between bcr and audimulch. What is missing may be the bcr is a morphing noon, but hey ca not currently exist. Also the possibility to make "jumps" with groups such encoders 10 50 via a dual-use groups: on-off and encoder.
The presets can grate simultanment paramtres 80 * 32: it is more than enough.
The inputs for connecting two switch pedals, convenient to the grate squence rhythmic dj if hands are on a keyboard (the one-man band of bcr ct)
In short, the bcr: perfect to control, plus it's class in the dark
See the source
Did you find this review helpful?yesno
Cookies help us improve performance, enhance user experience and deliver our services. By using our services, you agree to our use of cookies. Find out more.