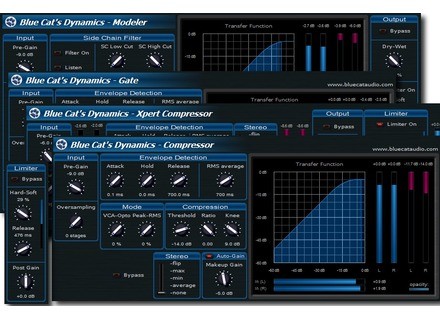 These new versions also include several fixes and enhancements such as improved side chain support in Logic Pro.

Blue Cat's Dynamics is an all-in-one dynamics processor that can act as a compressor, expander, limiter, gate or waveshaper. It offers advanced stereo and mid/side modes as well as several envelope detection algorithms. Blue Cat's protector is a brickwall limiter with simple controls to protect the output of your Digital Audio Workstation or increase the perceived volume of your tracks.

Demo versions are available for download on www.bluecataudio.com. The upgrade to the new version is free for registered users.

What's new in Blue Cat's Dynamics 3.1 and Blue Cat's Protector 1.2:
Snow Leopard)
with transport control in most applications).
only when opening the user interface of the plug-in.
hand symbol.
some hosts (Logic).
some applications.
instance in Logic Pro's Environment.
not record properly as automation curves.