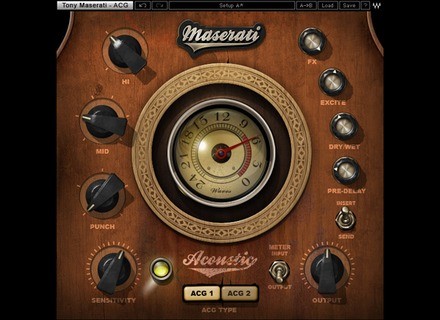 Buy this productView price information >
View other reviews for this product:
The Waves Signature Series plug-ins are designed to be simple to use. They are simple to install and simple to authorize. They are almost 'dummy-proof' in the sense that as soon as you load them up in your session, your mix will mix will improve. There aren't a lot of controls to worry about, which is a good thing. There are plenty of other plug-ins on the market with a lot of controls. I like having option to pull up a plug-in and not have to worry about parameters.
I own all the signature series plug-in bundles (Maserati, CLA, JJP, Kramer). Of all the individual plug-ins in all the bundles, I think this particular plug-in is the most useful and most unique. I would recommend the Maserati bundle just for this plug-in alone.

The Waves Maserati Signature Series Acoustic plug-in is part of the Maserati bundle. As the name suggests, it is fine-tuned for processing the recordings of an acoustic guitar. This plug-in is very unique in the sense that none of the other signature series plug-ins have a specific 'acoustic' guitar plug-in. Although, there are no other 'acoustic specific' plug-ins to compare it to, the Maserati Acoustic plug-in stands out as an exceptional processor. It really makes the recording of an acoustic guitar sound better, and also sit well in a mix. There are just enough controls to make the plug-in flexible, but not too many controls to make the plug-in confusing and complicated. In fact, this plug-in is almost like to separate acoustic guitar processors in one. The 'ACG1' and 'ACG2' settings sound noticeably different, which increases the usefulness of the plug-in for different sounding guitars and different sounding sounds.
Did you find this review helpful?yesno
Cookies help us improve performance, enhance user experience and deliver our services. By using our services, you agree to our use of cookies. Find out more.