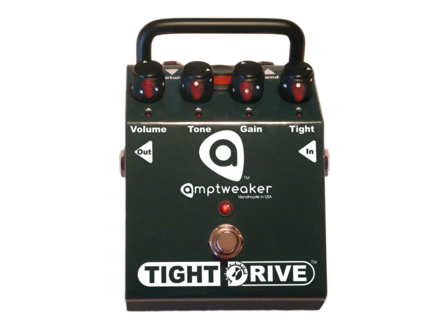 After introducing the guitar version of the TightDrive overdrive at NAMM 2010, Amptweaker extended the range of the Tone and Tight controls down lower into the bass frequency range, resulting in the Bass TightDrive.

The features are identical to the guitar version, including the Tight Control which allows the player to adjust the attack from a big thumpy, more traditional sounding bottom end to a tight, chunky, more aggressive attack that’s more akin to a guitar tone, the company says.

Another feature is the effects loop on the back of the pedal, with its Pre/Post switch that moves the position of the loop to before or after the distortion.  This is designed to give the player an easy way to build a ‘boost chain’ of effects and eq, and can even be used along with an outboard mixer pedal to blend in some dry bass tone when the Bass TightDrive is on.

Other features include a magnetic sliding battery door that requires no tools to access, and LED lighting on the knobs for dark stages. There’s also a battery switch so there’s no need to unplug the input cable after the gig. All this is housed in a 14 gauge steel chassis that is ergonomically designed to prevent knob breakage, and to allow for easier footswitching.

Availability
The Bass TightDrive is now available from www.amptweaker.com.